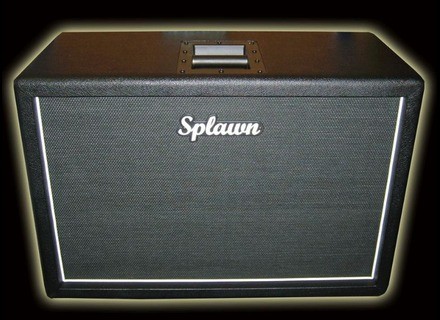 Le Taz's review (This content has been automatically translated from French)" Excellent speaker!"

Splawn Amplification 212 standard horizontal
5
If Splawn heads I had tried or were frankly disappointed me, I've just not been able to "return" it to the store 2x12. I ordered a Quick Rod stack with the 2x12 in Small Blocks match. When I unpacked the 2x12, I was surprised to see him finish as the best head lighthouse brand. Beautiful building, beautiful Tolex, beautiful color grill cloth basket case, grip handles, two laterally, and one on top, removable casters, and Neutrik jack socket ... Wow! The beast weighs his weight, because it has a deeper than average 2x12, corresponding to the bottom of a 4x12 Marshall. And once you plug in an amp, you immediately feel the difference with a 2x12 basis, it has its eyes on the "trunk" of a 4x12. With Small Blacks, the G12M Eminence sauce was almost cringe because it sends very strong. I just install my favorite G12-65 and there ... this is a pure delight. I intended to replace my Framus 2x12 (also in G12-65), but in the end it may be my 4x12 (I'll let you guess for HP ...) Marshall 83 I treasure yet, thanks to his monstrous diffusion and held in the sound.

If you are looking for a 2x12 can sound like a 4x12, 2x12 Splawn then this is a good option. I love, and I've difficult.
Did you find this review helpful?yesno
»