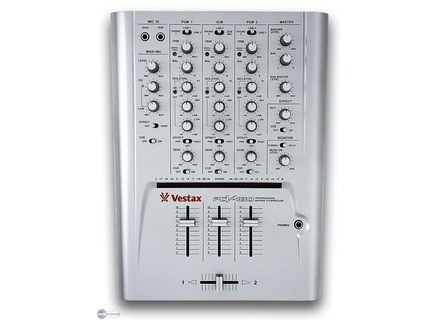 PCV 180, 3-Channel Mixer from Vestax in the PCV series.

MzM's review (This content has been automatically translated from French)

7 years
not
most: kill the bass, the warning: SNV fader qualitée
good
Yes
Did you find this review helpful?yesno
»

MzM's review (This content has been automatically translated from French)

I used the last eleven years
many cutting table at -25 db .......
most: the infinite kill, at least: low fader, I'm just open entries ....
good price / quality ratio
I bought
Did you find this review helpful?yesno
»

Kroman17's review (This content has been automatically translated from French)" Great opportunity!"

Vestax PCV 180
5
The table is not rackable. Master output Jack 1 / 4 "unbalanced (negative small), 2 Master output with RCA (to record niquel ),... article summarizes the characteristics: http://www.meetmusic.com/fr/archivedetail. asp? id = 206 & subrubriek = 8
Contrary to the article, I find the knobs strong enough. Level faders and crossfader (CF PCV), I removed everything (very simple with the hatch below), greased and dusted and hop off again direct it, it feels good!
Negative: can not resolve the curve of the crossfader (I will not tell you the form, I lack experience).

The table is original and has no gimmick: each function is more or less useful.
For effects, fx send-return section is a pure joy to use live (with a huge potential Kaoss Pad 3). All is well positioned, difficult to reach the wrong knob / fader / switch in action once the bug handling.
The manual uh ... not too useful when you know at least use a mixing desk!

The sound is clean, but I'd rather not go too far since my sound is not exceptional. Finally, if the brand is recognized, it's not for nothing!
The equalizer is taken well in hand for mixing electro, he not rise from there to 4 db but serves Kill (- infinity).
In sound nothing to say, we can send him the heavy it not saturate easily (it's not a reason to play the nag, but hey, the components provide in case)!

I use it for 2 weeks good (but it's not enough to judge the quality). Before I had a Gemini PS-04 and its just not the same thing (still happy I hear you say)! There afraid to rush knobs and faders, it's solid and it's not just the psychological effect of the mark (by removing one sees the difference immediately design)!
I also mixed on Ecler Nuo 2.0 and 3. I would have bought a good Nuo 3.0 but I found this Vestax almost equivalent to 100 euros less used.

The special feature I like most is the ergonomics, but hey it's personal, some are not at all like it!
The downside, I repeat, it is impossible to adjust the crossfader curve (which is possible on the Nuo example)!

The price / quality ratio is excellent used since the previous owner has not worn out / killed (eg, the CF-PCV crossfader screwed, and it is roughly 85 euros, so be careful)!
Did you find this review helpful?yesno
»