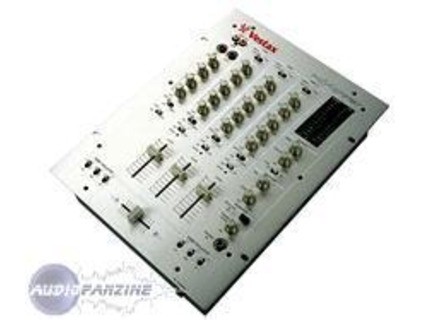 PCV-275, 3-Channel Mixer from Vestax in the PCV series.

Vestax PCV-275
4
No hamster...gots everything else though

Simple as all hell

sturdy as all hell

Its good for techno, but not for house....bass is too droney sounding...not very thumpy.

I loved this mixer except for the sound quality. no matter what eq config i had theres just not enough high end and the bass is way too droney and hollow...not thumpy at all.

Vestax PCV-275
4
I miss separate VU's for each channel but otherwise I think it's plenty bang for the buck. The effects loop in particular is wicked - it's quiet, has both send and return controls and has both a pre- and post-fader alternative.

It's so easy to use even my grandmother could operate it. Everything is logically laid out, every switch and such is in the right place. Hooking up my CD, turntables and effects unit and getting to grips with the whole mixer took me approx. 10 minutes and after that it was easy as stealing candy from a child.

Considering the price, I think it has no real competitors besides the Ecler SMAC30 in the same price range. It obviously do not compare to, say, a Rane or an Allen & Heath, but for smaller parties and clubs and home use it performs really well.

I wouldn't trust it for a world tour, but I've had it for a few smaller gigs and it's stood up to abuse really well. The buttons feel great, and my only nag on it is that the knob on the crossfader tends to feel a little loose from time to time. I never use the crossfader though, so for me that's no problem. I've contacted their customer support twice (via e-mail) before getting it, and both times I've had a reply within 24 hours, which has been both helpful and nice.

Of course, there are always a few things you'd want to change - the one that springs to mind are the VU's and the fact that it's like 11.5&quot; wide, making it completely impossible to fit in a coffin or a case. Dumb thing. On the other hand, I'd not hesitate to recommend it because although it has its flaws and there are perhaps better mixers out there, this is a great intermediate mixer that would work well in a longue or at a small club.

Vestax PCV-275
5
It has everything I need, kill switches are amazing. EQ's are decent. Cue meters all work nicely, and the AUX send/return is usefull. It would be nice if it had a headphone cue pan and a cross fader curve though.

Very easy to use, everything is layed out well. Manual is not necessary to use, but it's alright.

Never had any problems, and the build quality feels very sturdy.

Originally posted on FutureProducers.com
Posted by: Unknown ( 6-, 2002)
Did you find this review helpful?yesno
»

Vestax PCV-275
5
This is not a 'scratch' mixer but the fader is incredibly loose. It feels like a real scratch mixer, and also has awesome features for mixing like kill switches. it also has effects loops which i probably will never use but i know they are there if i need an fx unit and has three channel, three band eq.

It took me a little while to get all the plugs in the right slots, it is kind of deceiving how to set up a two turntable set up.

Sound quality is awesome, it is focused on mixing but is also awesome for scratching. the eq's are awesome and so are the kill swtiches.

The buttons are all metal and the mixer is built of solid steel.

this mixer is awesome and i will have it for a long,long time.

Originally posted on FutureProducers.com
Posted by: Unknown ( 4-, 2003)
Did you find this review helpful?yesno
»
Read the 12 user reviews on the Vestax PCV-275 »