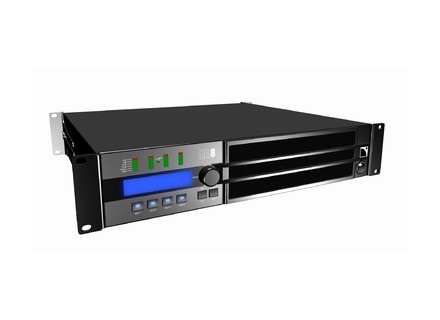 Havelock's review (This content has been automatically translated from French)

L-Acoustics LA8
5
Rating: 4-channel amp and not 6 as indicated on AF

I use this amp for 2 years now, on the SB28, the 12XT, the 108, the dV-DOSC, the kiva, the kudo and more ...
This is an amp with onboard processor and preset at specific driver speakers brand L-Acoustics.
There is a preset "white" to be used on other forums, but never tested.

I usually used with a Dolby Lake processor into his head amps.

what I like:
+ The power to weight ratio, 4 Channels 1800W in 13Kg
+ The remote control for my part all the amplifiers are connected to a WiFi router and ordered the touch pad.
+ Quality and reliability of the beast and followed L-Acoustics (we had a concern on some versions of formal power protection when the grid is really bad after an update, no worries). Cable alim who recall some of those Crest PRO 9001, not 1.5 mm ²)
+ Some presets have been really improved over previous use on LA48a.
+ Morph the array can sometimes be fun without abusing it.
+ Possibility to enter in AES / EBU in the amp, hi-digital console to the amp.


Least:
- Which can sometimes be a plus presets hypermarkets protected
- The Remote Manager is not very convenient to use and is "too close" for my taste
- Possibility of equalization built sometimes too limited, hence the lake ...

miscellaneous:
+ Sound, because it is important nonetheless.
It is designed to push the L-Acoustics and now we have no choice, it LA4 and LA8 or point bar, which makes comparisons difficult. In any case, it works, and even more brilliantly.

Value for money:
It depends on where one stands, if the goal is just to power the speakers in 8 or 12, "when an association is, the receiver may seem overpriced.

If it is to push the line-source or the receiver expresses its full potential, the price is very correct and in line with other major brands.

Published on 04/08/11
Having recently joined the certified Creston Integrated Partner Program, L-Acoustics announced that the module developed in collaboration with Creston is available for immediate download.