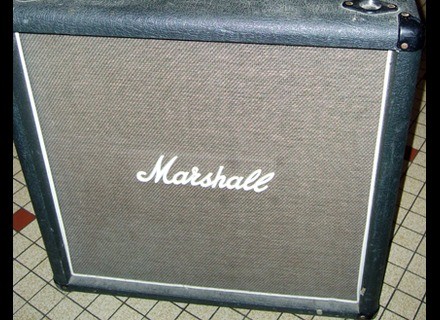 Marshall 1965B Lead
5
The Marshall 1965B Lead 4x10 is a speaker cabinet for use with any guitar amplifier head. I've used it both with a Marshall lead and otherwise, as it's useful no matter what head you're thinking about using it with. Like the name suggests, it's got four 10" speakers inside of it, which is smaller than your average cabinet that will have 12" speakers. The cabinet only has a 1/4" speaker jack in the back of it for plugging in your head, but beyond that there isn't anything in the form of controls or connections. The studio I work at has one of these and it's really the only separate speaker cabinet that we have. We have it for use with our Marshall JCM800 head and it also will see occasional use with our Mesa Boogie Dual Rectifier head. Either way, the cabinet does it's job and it does it's job well. Any speaker cabinet will only sound as good as the head you're sending to it, but with this head you can definitely rest assured that what you're hearing is the amp and the amp alone. I don't really know what the availability of this cabinet is, as I don't believe it's being made any more and don't know how many used models are floating around out there. I like the 4 x 10 size, as I don't think 4 x 12 is really going to be necessary all the time, least of all in the studio where you're most likely only going to be mic'ing up a single speaker anyway. The bottom line with speaker cabinets is if it portrays the amplifier accurately, and I haven't found anything with this cabinet to suggest otherwise. I'd definitely recommend the Marshall 1965B Lead 4x10 as a smaller speaker cabinet option for use both in the studio and elsewhere.

Marshall 1965B Lead
5
Version pan right to a full stack with a cutaway 1965a: 60cm/60cm, 140watts RMS, complete with original Celestion 4xG10L35 (96db 35Watt for each)
I have eight at home, replacing large equipped 1960 G12-65 Greenback or rola.
What I like most is the size and weight, all very practical. The G10L35 dedant which are interesting, I like them mainly associated with various models in G12 Celestion. In contrast, the 4x10 alone can seem a little "nest of mosquitoes" especially distortion pedals on the head transistor, but sure to set the equalizer, it can. I have several versions, two of which are replaced by G10L35 G12T75, V12-60, G12M Greenback or G12HOT100. The important thing is to find the dynamic balance between G10L35 and G12 that are associated. It must be very careful not to put a Vintage 30 100db or worse a Century of 102dB. I urge the G12MGreenback G12T75 or according to what we play. The advantage of the G12M is not to be forced to take power. In contrast with G12T75 must climb the towers with a good head 100 watts Mosfet genre such as Lead 100. With a hybrid genre ValvestateRH100 head, I recommend also G12HOT100. Three-body for a full stack, a cabin with 2xG10L35 2xG12M, the second cabin with 2xG10L35 2xG12T75 or HOT100 or V12-60 ...
And it farts it sounds, it's happiness, as low volume louder.
The value for money is interesting, and often lower back will thank you ..
It's been 20 years that I like sailing between 4x12 Marshall 1960 and 1965, and I can tell you it's a shame that Marshall has stopped the concept. Yes I would do this choice, the evidence, I again eight times in 1965a or B, and I wonder if ... but this is of gluttony.
When will a new range of options with Marshall 2x10 and 2x12 associates? And why just a small head lamp 50 or 60 watts 60cm wide to go over?