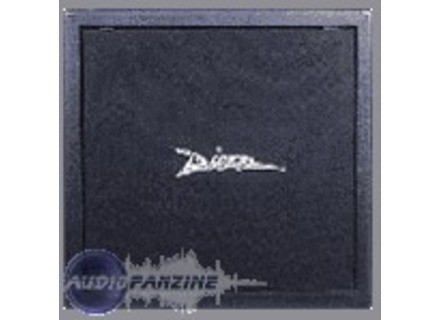 Diezel 4x12
5
Here is a cab INTERESTED trs. First, it is compact trs ... 73x73 count is small and allows, in passing, to go into the trunk of the colt without the cut.

Then the essays MODELS taient with "road ready", they were directly built by Diezel, even their hard case. Super robust if not unbreakable. The two cabs tests taient flanked membranes fixed "from the front!" Spcificit This gives a little more dynamic attack and eats a bit of roundness in return (nothing is free).

The sound appeared to me to be effective and trs prcis, a silent REFERENCE dynamics in the Contents and will share the Premire walk with NOS, and other Bogners Custom Audio Electronics . A small dtail, a significant bump in the bass, which soon become monstrous according to the head uses. No torsion ngative for this exercise, when you send it transcribed bass! Other frquences Fidler are delivered with a sharp hair flute (therefore more enjoyable)! The guard (and thus the absence of the coating tress), gives a rsultat a little colder than its counterpart "fabric".

The fabric homogne silent, he, a normal cab with black vinyl upholstery. Spctaculaire nothing in the finish except that it does not suffer from any criticism and everything is l. This version goes silent with V30 "rear loaded". Here's a bit silent warmer and rounder than the cabs prcdemment deficits. INTERESTED more for uses oldschool, he did not show more for the less INTERESTED mtal, or in the lower dveloppement is more structured.

Good cabs, but in Switzerland we try to kiss you when you Achte's making you believe they cotent over 2000 balls. Out, balls 1200 is the current price a little gnral (Germany, France, Usa ).... not cool mister marketing!

(10) brle good for a pro who knows the apprcier
Did you find this review helpful?yesno
»

Higher Gain's review (This content has been automatically translated from French)

Diezel 4x12
5
Somewhat the same view that the 2x12, the difference was that I indeed had this one.

I was looking for the best speaker for my Peavey 6505, 4x12 I tried all I saw: mesa recto, brunetti, krank, peavey ..
for me one who most respected the receiver, ie keeping the same type of sound was the mesa and Diezel.
I had a marshall 1960a before the mesa sounds Extremely good, very precise, sharp, but very warm and round.
Diezel on him is very precise, a bit less sharp but not as warm and round the mesa and thus sounds slightly more 'modern' to me.
My choice fell on the Diezel who has more 'character' that the mesa since we do not find it in every mag.
the mesa being over-used by metal bands, I wanted something less common.
the Diezel sounds really well with my 6505, the lead sound is greatly enhanced by its precision, definition of notes ..
cons by the clean sound was better with the marshall.

Then the cabinet itself is of very high quality finish of sick, extremely clean no fault of the inverse marshall. Tolex very thick, protects aluminum angles, superb .. was within the same, it is even painted in black, large braided son connected to hp, that's good. it exists only pan right, slightly inclined inwards to let the sound mounted.
small snag it rolls poorly, small wheels that often clog a tower Castorama and the problem will be solved.

purchased for 750th OCCAZ I can only put 10, given the quality, price, which is 1200th of nine so I really got lucky, except wheels and the worry clear worse, I can not penalized by having the sound qualities lead and it offers aesthetic, mine is black but I would have preferred gray.

4x12 I think the best for now (not tried or Bogner Fryette but these brands are not really my style .. ds to see)
Did you find this review helpful?yesno
»