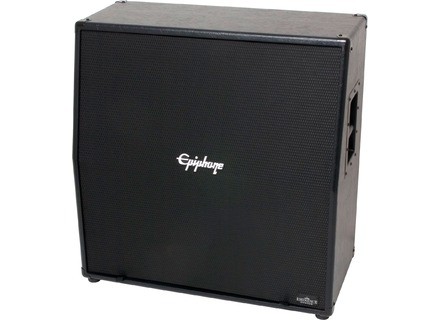 Epiphone So-Cal 412SL
4
I use this cab for a little over 2 years.
I bought it because it was the cabinet that went with the head So-Cal I already had, and he was traded away to one third of its original price. At that price, it was very tempting!

The cabinet, birch plywood, is serious, without being either at the top level. But everything is assembled, nothing bronchus ...
There is just the front seems a bit fragile. The Tolex is marked quite easily too (nothing dramatic, however).
Level weight is rather light, in fact ... Finally, relatively light (called a 4x12 anyway). Say thanks to the side handles, it is possible to move one without being built like a wardrobe Norman.

The HP (accessible from the front, secured with Velcro) are Eminence Lady Luck, built specifically for Epiphone. And it is clear that without competing (obviously) the G12M Heritage, they are downright interesting.
Efficient, manifestly. No harsh for a penny, an old grain, dynamics ... Nice surprise!
They will be perfect for a record blues / rock / hard rock / pop. However I find less comfortable on most modern records.
The projection is good, nothing flinch when we send the watts ...
In short, it's not upscale, but it's a small speaker quite interesting, which makes the job well, that sounds really good, without flaw, and should be priced symbolic OCCAZ . So really nothing to do without!