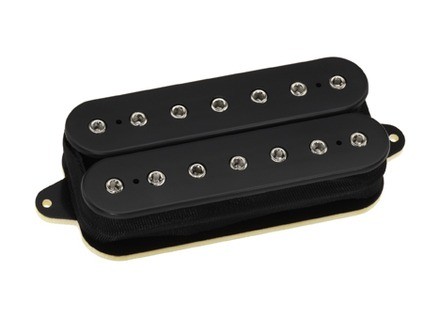 
3 user reviews
Find it in the classifieds starting at $55 Avg used price: $60

The Blaze Bridge is a high output bridge pickup meant for the seven string guitars out there. DiMarzio says it’s a scooped pickup, and while it is, I find that the midrange is just shifted more to the low mids. This helps the pickup sound real huge, but it’s not too flubby. The high end on this is nice enough to where it’s clean sounding without being overly harsh. Split coil tones are really good on this, and the parallel tones are good, too.

The Blaze Bridge is actually just a seven string version of the Steve’s Special. If you’ve ever used the Steve’s Special before, you’ll know what this pickup sounds like. Although the pickup was designed around a basswood body, it should work in nearly any wood you’d like to install this in. DiMarzio mentions clean sounds with this, but I’m not a fan of using the bridge for clean sounds. They always sound too bright.

If you’re looking for a bridge pickup for your seven string guitar, this is definitely work checking out. However, I personally prefer the Blaze Custom as it has more midrange. That helps it drive the amp a bit more and help shift the midrange to make things a bit tighter. The good thing about this is that it’s been on the market so long that you can find them real cheap used. Even if you do decide you dislike it, you can always sell it for what you paid for.

This micro equivalent of steve special in 6-string according to the manufacturer, is excellent in many respects.

1 - First, the microphone is accurate clear sound in saturated (it works well on guitar, alder and lime) which is no small quality.
The 2-string bass is so well made is not sound muddy at all (if only one rule though his amp for guitar 7 string)
3-The sustain is very good and combined with its accuracy, this makes it an excellent mic for solos.

Ultimately, this microphone is the most versatile and effective for the DiMarzio 7-string and should try at least once by every scratch of the 7 string. It may, however, seemed too straight forward or not enough for some, is the price of versatility.

miaoulechat's review (This content has been automatically translated from French)

)
APRS galr have with my soldering iron rotten, I was finally able to test it on my RG7-620, replacing a DiMarzio Custom7 (or New7) Mount of origin.

Before I get on well test substance than before. So I could compare:
-More gain
Prcis-plus
-Softer
Mdiums-less (but good because I tend to add on the amp)

I could also compare the same on a micro UV-BK777 Universe (by the way is a beautiful skyscraper, I was kindly prt and of course my choice to the east Blaze ). And in fact, on RG7, oddly, there is a bit less gain, the sound is more crmeux, less aggressive but more grainy. However, the pickups are essentially the same
distance of strings (a bit closer even when the UV). But must be of violin making.

In short, for once I have a sound that suits me perfectly, I redcouvre that became my RG7 prcise, nerve, but not necessarily cold, however.

I play the big no hardcore dyed passages, and in two cases was the fact carrment. I have the power riffs jump in, and the precision in the fast riffs.

I bought it for 55euros OCCAZ. Nothing wrong: standard.

I put 9 because it's annoying to get a micro soldering iron with disabilities like me. Pt