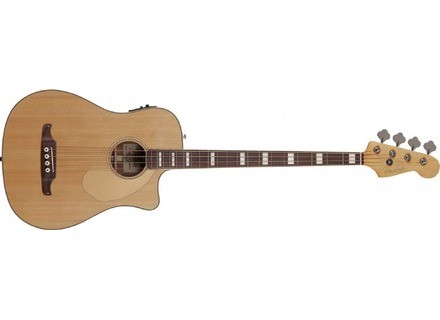 Fender Kingman Bass SCE [2009-2012]
4
The Fender Kingman Bass SCE is an acoustic-electric bass guitar that's on the newer side of Fender products. I don't know exactly when they started making these, but I only tried one out in the last few months. The bass has 2 frets and features a Fishman Presys pick up system that consists of a built in tuner and preamp. The bass is made out of a variety of different materials, including laminated mahogany back and sides, a solid spruce top, and a rosewood fingerboard.

Playing the Fender Kingman Bass SCE isn't a difficult thing to do at all, as it's got a nice and round neck that's pretty easy to get a grip on. It has a different feel than that of a standard electric bass guitar, but this is going to be the case with almost all acoustic basses. As far as the controls for the pick up system goes, it's got bass, middle, and treble EQ control, as well as the tuner, volume control and body EQ control. I'm not in love with the sound of it when it's plugged in, but getting the most out of it both acoustically and electrified isn't hard.

I prefer the sound of the Fender Kingman Bass SCE when just played acoustically, but it doesn't sound bad at all plugged in either. The Fishman pick up in here actually sounds quite clean. It's got a pretty deep overall sound to it both ways, and it's nice that you have a decent amount of control when it comes to the pick up, so at least you're not pigeonholed to one sound with the pick up. It's not the best sounding acoustic bass that I've played before, but certainly has a pretty nice overall tone.

If I were in the market for an acoustic bass, I don't think I'd be going with the Fender Kingman Bass SCE. It's not to say that it's not a nice instrument, which it is, I just think it's a bit overpriced for the quality. I'm not the most experienced when it comes to acoustic basses, but most of the models that I've played beyond this one have been cheaper than this and I've liked them more in terms of feel and sound. Of course the Fishman pick up in here definitely boosts the price up a bit, so it's worth weighing the option if you're going to mostly be using it plugged in. If you're just looking for something to play acoustically, I'd look elsewhere, but this is still an instrument worth knowing about and considering...