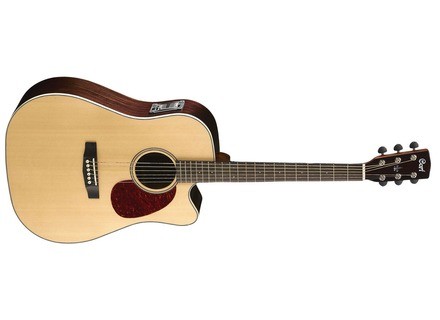 MR720F, Acoustic-electric Folk/Western guitar from Cort in the MR series.

Cort MR720F
4
Dreadnought fairly standard, solid table a bit more elongated than the shape and Martin with a cutaway.
Handle relatively thick and narrow, it is more a guitar for accompaniment for solos.
It has a Fishman preamp with 4 band EQ (bass, mid, treble, brightness), a general level and a tuner that works quite well.
No attachment to a strap at the heel, I'm a little disappointed, he'll have to fiddle with a string on the head ...

The handle is nice when you love the sleeves and round a relatively narrow between the strings. That said, if it was not like the feeling of playing on a "stick", I had better stick in this price range (Art & Lutherie for example) I said it was a guitar accompaniment rather than dedicated to the solos, yet the cutaway offers good access to acute, and make solo is nice even if there will be much faster like this guitar.
The box is as large as that of a dreadnought but rather thick, but I have no problem with fatigue or ease with it, I used to play for hours, no problem at this level .
At the preamp, equalizer works very well and the frequency bands fall rather well with this guitar, but I do not use very little, preferring to mix this treatment to the console for something and adapted from really.
Access to the battery is easily done by "unclipping" the preamp and there is enough slack between it and the sensor to be at ease in manipulation.
The tuners are good, stable access to the truss rod is not the most obvious through the canopy but we made it. The bridge is just asked her what makes height adjustment easy.

Overall this is a rather powerful guitar, with his rather brilliant.
Fingers is very balanced, it sounds really good, the serious and delicate at once, it's great. To pick the sound a bit hollow in the lower medium, this going elsewhere with the nuance, the more one plays softly over the sound is balanced, the more you play, the more she becomes rich and snapping sharp but too my taste, to become a little aggressive, registration, missing a bit of "body".
It is a good guitar to € 300 / 350, should not expect to have a great sound very rich and full in the bottom that price. This is also the one who defends the best on this point, actually. I tested a Takamine (which I forgot the reference), the Seagull S6 and the Art & Lutherie Dreadnought in the same price range and all had fewer medium, serious, and power than the Cort.
Well, Takamine and more I find it hard because I find its really no personality and even dug in the lowest grades, with the S6 I really had to strain to make out a melody in the middle of agreements or even simple enrichment rather vague, then, and it is the Art & Lutherie who was doing the best alone, mostly to handle very nice, but with a severe lack of bass and midbass anyway.
Connected, the sound is really not bad at all, I was even quite amazed. Eq is nice acoustic amp and found the power of the guitar and its tone fairly accurate. Nothing to say from this point of view there.

I play 3 or 4 hours per day for 3 weeks, I'm really happy "for his price."
I'm happy but it remains a "little guitar" less than 400 €, I took it for lack of budget to get better, and then because the folk guitar is relatively unimportant to me, I play a lot more about electric (and therefore more I spend my budget). I just wanted something honest without ruining myself, a folk guitar and relatively powerful "full" to the accompaniment. There is completely won.
Yet I had the head when the salesman advised me. "Cort" is a trademark low-end Asian, I was more attracted by Art & Lutherie example. But it's ears and decide for me there was no picture. Afterwards, if I could put 600 € in a folk I would not have made obviously, but in this price range I have not heard better (I have not tested the Yamaha, and I regret it because I think it's a brand that's worth hearing in this price range)
With hindsight I regret a little this side "dug" that comes with the grade, but somehow, in this budget, I did not have much choice. So I'm pretty happy, but I repeat that if folk guitar is your main instrument, save a little more to get in another band, it really will be worth the shot.
Did you find this review helpful?yesno
»