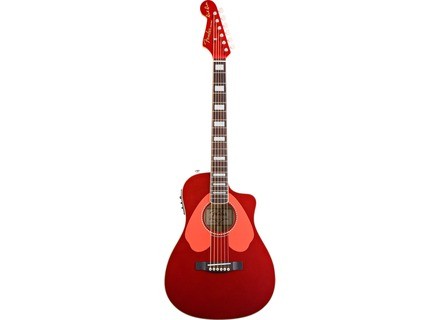 lepenvschirac's review (This content has been automatically translated from French)" Much to donate to Fender ..."

The neck is not bad, it reminds me of the strong Telecasters but with one side "more slippery" I do not know if this is the varnish, but it slides a lot and therefore can play fast on it. In addition to the head thrown a stratovolcanoes gives it its charm.

Otherwise access to acute is easy, because it is well-cut compared to some.

The tuners are plastic which is a little toy ... and also makes pickguards ... So really bad because we have a nice table and a nice guitar polish but is marred by these parts ... However we remain in the made in china, a few kinks here and there but nothing very serious, however it is still sad to end up with an example incruistation

Her body is really small, making it very light.

For that price you could have better I think, we pay the Fender logo and signature of dick.

To quote my old, it is here that the Romans grabbed ...

Since this is an electro acoustic I expected it to sound even when sound (it seems logical?) But it's really far from everything, without exaggerating I paid 200 euros a crafter that new sounds 100 times better ... It vibrates everywhere, the agreement does not terrible, I find just disappointing ... The sound sounds too fat, too messy, I tried several more games and pulling strings, telling me that the concerns had to be changed but nothing to ...

There's two issues that must still congratulate is that his body is really small but it still really sends. Fishman on the mic is not bad, once connected, it improves the sound but hey what do you go when the sound is starting to chi ***

I have since it came out, this must be a little over two years and it's sad because I care only for his mouth, it is beautiful for a sound, it's attached to my wall and not decorate evil. But what I was disappointed by opening the beautiful fly box ...

This is far above the competition for a guitar china electro to 600 euros, or other epiphonne sound better, it certainly is unusual and probably never will see you but this is surely due to the fact that it is the heavy seas ** ... Fender was probably in need unless it is good old Dick, he would be to rebuild a new barge on which living ...


I strongly recommend and if I had to make that choice I will not do probably not ..

the handle is very nice, the frets are perfect, you go up the treble easily.
the sound is loud enough for a relatively small body size. The guitar tune almost never do (I'm staying four months without giving when I play 2 hours a day).

It is suitable for all styles of acoustic music, the solos go over very well but against the bends are a little hard. I play with an electro behringer amp and the sound is very pure, crystalline.

I use it for 1 year and there is nothing wrong, it is really very good.
EXCEPT the battery is discharged to the microphone in 4 months XD.
what I like most is the ease of strings (I play on elixirs), without the sound of the guitar amp.
The value for money is very good because I've experienced a cort a 900 euros and the sounds of Dick Dale is best.
His little body can take it everywhere, even to travel, it is ergonomic and reliable. with experience, I think I'll buy one for my son, in a few years.