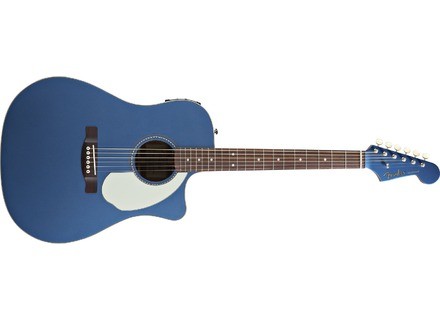 - Although the brand is California, the Sonoran is made in China, as 99.99% of musical instruments.

This guitar is beautiful, devastating look, impeccable finishes and varnishes. I particularly appreciate two things: first round, ie the head of strato beautiful wood but also with frets that is not surrounded by a white border that hopeless, I blame the Japanese. Then the position of the jack, which is not integrated with the attachment of the strap but slightly offset, which can stand the guitar on a stand without being impeded by the cable. This guitar is really sexy and very enjoyable to watch. Too bad there is this plate next to the rose, which I find useless (you really play like a nag to scratch the table with a pick).

I note that the guitar I had (I sold) was gray color (Silver) class really, but it seems that this model no longer exists, so by default I leave my opinion on it. All Sonoran sce are identical, only the color differs.

This is where the major flaw of this guitar, yet beautiful as I said. Rendering when connected to an amp is really not terrible despite the Fishman preamp which is however a reference. The bass is barely audible. We hear of course, but they lack punch, it was nice to adjust the bass background, nothing to do. Moreover it should not be confused grave and low, I mean the sound of the two bass strings, and the middle, you'll understand. I tested on an amp yet excellent, Roland AC60, comparing with Yamaha CPX is day and night between the two guitars. Even my little Talman Ibanez makes it better. My style of play is rather the pump, ie accompaniment to Brassens, then you will understand that the bass is essential.

Other defects which penalizes the game: she frieze. It is explained in the sense that Fender is primarily a designer of electric guitars. Fender electric guitars though are excellent, however the sound is lame because the manufacturing process is not suitable. Indeed, reproduced a Fender electric guitar neck on an acoustic guitar, result: the action is too low, the vibration of the strings touch the frets and it borders. In addition to acting on the truss rod (with great caution) I inserted pieces of matches under the saddle to raise it a little. It was effective without being convincing as the risk remains with the expansion phenomenon, changing strings, etc..

It's funny all the same as specialists like Fender are unable to detect these defects, to believe that they do not test their products before launching them on the market (or they take the guitarists for neuneus they are wrong guys, there is not a scratch more picky).

If you set the guitar to remedy the crimp (frisement? Crimp? Friserie?) And if it is indulgent with the lack of bass amplified, the guitar remains correct throughout, its main advantage is its look because pest must recognize that it to the class. The price / quality ratio is good, so far without challenging competition. I would strongly advise other models by comparison, each doing his own opinion. FYI, Fender manufactures virtually no one model of Sonoran the Bucket.