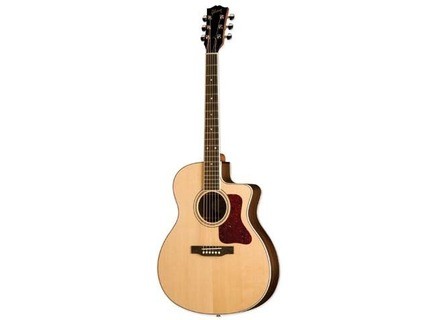 Julien1503's review (This content has been automatically translated from French)" Value."

Gibson CSR-CE
5
Made in Canada (following the acquisition of a few I do not know brand (Garrison without certainty) by Gibson. This is a form called "grand concert" cutaway. So a box big enough, with a "notch" I prefer compared to the models 'symmetrical'.
The spruce top, rosewood handle (hence the "R", compared to the MSC on which the neck is mahogany). Everything is massive.
The key is ebony handle, although the round on the back.
The tuners are Gibson silver.
The péamp Fishman is a "prefix pro blend, with everything you need as controls: bass and treble, contour, notch (anti-feedback), with also a button stage and off stage.
The big plus I found two pickups on the guitar, piezo and another on the body, can be mixed the two like we want to use only one or the other.
For finishes: pickguard under the canopy style scales turnYou'll, white stripes, on the edge of the caisee, only the logo appears Gibson headstock (nothing on the truss-rod cover, I changed to another siglé Gibson, ends a little scratching). There is very little polish, especially on the back, but it is no more fragile than another. It is the weight of a sound "normal" I think it should be average, not really very heavy.
The tailpiece is ankle, much less convenient than those which we pass just inside the ropes (like an electric what). Ankles it crashed, it turns and it's not too expensive, but it's still less convenient (better to have in advance).
The input jack acts as a belt clip (I do not like too much for me), for any cons clip strap at the handle: it's boring. Me I did add a strap-lock type in a store, knowing that it blew the guarantee ... but not really using the strap-lock fitting on the other side of the coup ...
The Gibson hard case comes in black with the inscription "Gibson acoustics, black interior).
Note that the rose is "standard" size, so the cover roses sold commercially there will no problem (which is not the case on a lot of other guitars, I know something!).
Frankly this guitar is extremely well finished, very nice and well equipped, I put 9 / 10 because of ties-strap and tailpiece.

The handle is very comfortable to play, this is probably due to the ebony fingerboard.
The lightness of the guitar does the rest, the cut side upright is perfect for soloists, and fastened with a strap is really well balanced (for me, pierced in the heel to the back of the box).
The sound is quite full, quite surprising for a cutaway guitar! Very good bass as amplified vacuum, a pure joy! A 10/10 so I am conquered.

I think we can do a little of everything with the CSR, for my part that goes from the French variety (Goldman, ....) through the blues (Clapton, ...), and even the good rock see more (I use it as a group on songs like Nothing Else Matters by Metallica for example). In picking is nickel, slide also what I could get out. Someone much stronger than me will do what he wants with this guitar.
On amp is the same but stronger, is an electro-acoustic what. For my part I have a V55 Bugera, the sound is excellent, it depends on the setting of the amp. I just use the reverb, the amp in concert, but no other effect so the guitar is effective.
I've never had any feedback, good I must say that the cache-rose continuously, but nothing with the notch, it depends on the frequency and it's all good.
A 10/10 for sound, most excellent.

I am blessed to have this guitar for almost a year. It has a dozen concerts behind her and has never disappointed.
Before I had a Lag Primavera (entry level), even if this guitar was nice and well it has nothing to do. Before buying the Gib ', I hesitated between this and a Taylor. I could never find Taylor store, and I tried a CSM-CE. For me the sound is the same, only difference is felt in finishing the price: 200 euros more for the CSR (I think it is abused on the other hand). Because I found the CSR on the internet cheaper than the CSM in the store, I did not hesitate long. It's sort of a mid-range at Gibson, but frankly with them we are never disappointed (my electric is a Gibson VooDoo elsewhere).
So I think it value for money is not bad (Taylor still looks good, but the Takamine also other guitarist in my group has one so I wanted to sound a little different, and Martin is too expensive for me).
I do it again without hesitation that choice for me is a must, too little known. 9 / 10 in total because 9.5 is not possible on Audiofanzine!
Did you find this review helpful?yesno
»