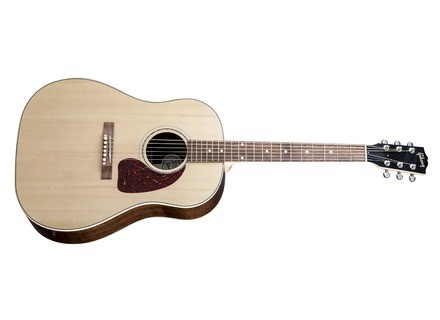 Gibson J-15
4
The size and format are the same as a J45, but the features differ:
The top is made of solid Sitka spruce
Back and sides in solid walnut - the back is especially beautiful
Maple neck, rosewood fingerboard and walnut bridge
Mini Grover tuners
LR Baggs Element pickup & preamp

The guitar looks simple, except for an abalone circle around the soundhole.
I find the pickguard rather ugly.
The bridge is rather small and seems lost in the middle of such a big body, let’s hope that it’s sturdy.
I got this guitar almost new, as its original buyer had only had it for weeks before he decided to trade it for a Larrivée I owned.
The guitar’s action is a bit high, but the neck is straight and the slight V profile suits me well.

The instrument sounds powerful, with nice lows and highs that are both present and smooth, so far I found the mids quite discrete.
In the past, I used to own a 1973 J45 (not so good), a 1990 J200 (which sounded great with a pick), but I chose this J15 for its walnut construction and I’m satisfied by it as I now only play using my fingers and this instrument reacts very well to fingerstyle play.
The LRBaggs is rather basic but does the job, as long as it’s associated with a goor amp or preamp.

Value-for-money is rather good, and building quality is flawless.
Did you find this review helpful?yesno
»