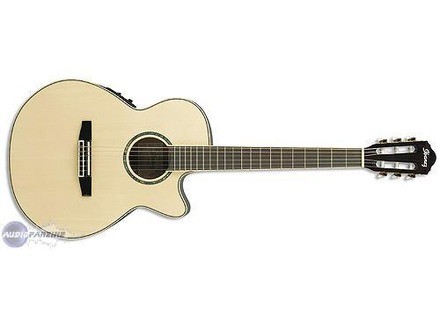 AEG10NE, Acoustic-electric Folk/Western guitar from Ibanez in the AEG series.

I love the ergonomics of small boxes.

Nylon guitar, I bought it to get into the bossa directory.
Petty cash can play even when the children are asleep!
However, the sound is pretty poor when not amplified ... With a good acoustic amp, the guitar takes on another dimension and becomes quite enjoyable.

I used a small year before changing to a guitar a little more "upscale" to have acute, including clearer.
The price / quality ratio is very good.
With the experience I would do this choice, the guitar has to keep some resale value.
Did you find this review helpful?yesno
»

vini59's review (This content has been automatically translated from French)

the grip is good is the guitar balance

In acoustics, the pan shot and prevents prampli to have its full, but really it's more than adequate, with bass and treble, it's not a guitar 150E
but the amplifier is off, puissanse, FISHMAN sensitivity would have it, plus it is a tuner Intgr the scratches!

I did pa long time but she is pretty, pure and classical guitarist will be surprised by the smoothness of mache and width (48 mm)
Really it is beautiful and versatile electric guitar you Tatner, the transition is smooth ....

The report price is exellent quality 320

OlivierLalauze's review (This content has been automatically translated from French)

Ibanez AEG10NE
4
-Guitar factory in China. Channel 20 boxes. Table "spruce" and rear cts in "mahogany" handle "mahogany" also. Key in "Rosewood". The handle is trs end for a nylon string guitar, classical guitar fans will certainly be a little Drout. However, no problem for electric gutiaristes.

This guitar for the price is more than good. Its main use is the scne. The body is relatively thin, if you play two, it will be hard to hear from you if you play acoustic. Few rsonnance in revhance plutt sound pretty. When the branch, the prampli allows you to add more roundness, and it s our little Ibanez takes off! I tried recording studio, a bossa, and it sounds perfectly fine (Obviously for the price).
As for the jouabilit say anything, the handle is trs enjoyable, the pan shot can ease a CASC in the high, ideal for the chorus.
I would put 8, although it MRIT less, but the report qualitprix that ...

It sounds good for the bossa, and jazz, I asked gnralement so. The sound typical nylon. It is rare that I branch, or if so, live on the sound system. We can fix the piezo sound unnatural with the rglages prampli. The sound is better than a finger in jou mdiator. Pity she is so very powerful when it is not amplified ... But hey, it's a guitar made for scne: Petty cash, less feedback!

I use this guitar for almost two years, and for the price, I'm glad plutt. It remains to see how the wood will evolve with the ge ... Trs a good guitar for beginners, trs complete, and a good second guitar for electric guitar! Report qualitprix Ibanez: Excellent

All that is necessary has been said by Kidrebel. I would add, however, that the characteristics of this instrument, the first round end: 46 mm at nut.
A classical guitar is usually around 50 mm. This handle is adjustable with a scratch on the stem as folk (is accessed via the soundhole).
The bridge is not positioned as classical guitars "normal": it is placed in the up position (towards the sound hole) like the folk guitars. This AEG has the same body as the AEL AEL 20 or 40 of the same brand. The AEL is a folk guitar with steel strings.
The body is also thin. All this gives a special sound when playing acoustic. But when used in electronics, is the SST preamp plays its role fully and the result is a range of different sounds through powerful settings of the preamp.
Note also that the battery compartment of the two rounds are on the block and XLR output jack, not the preamp itself, as is often the case for the electro acoustic.
I also find that the strings are mounted original do not appear to be top and I'll replace them soon.

I pass this guitar in general through my old Roland DEP 5 and is the enthusiasm that I won!

I also had vibration noise on the last string. Apparently, it was a poor insulation block outputs (XLR-jack). With a little moss, the phenomenon has disappeared!
This is my first guitar "classic" and I wanted it to be a bit special:
- It does not look like a normal classical guitar: it has a form mini jumbo
- It has a handle end (I'm not out of place compared to other guitars I own)
- It has a cutaway
- It has a shallow body
- Has played a particular sound in acoustics (I like) played electro, it has an extra potato (I love).
- It is not too expensive (which does not hurt)
In short, I have chosen, and I do not regret it.

But in the end, I would say that this guitar must be seen as a "nylon string guitar" rather than a real guitar "classic". And from this perspective, she is tops.

Did you find this review helpful?yesno
»
Read the 5 user reviews on the Ibanez AEG10NE »