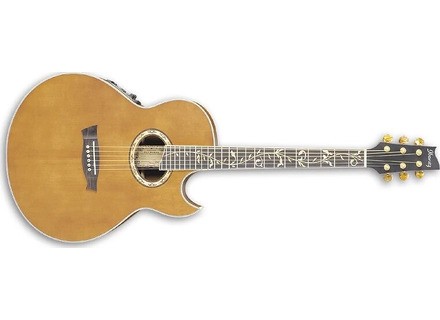 ted69000's review (This content has been automatically translated from French)" That happiness, complment ..."

idem
Did you find this review helpful?yesno
»

yakisoba's review (This content has been automatically translated from French)

Format "grand auditorium" (smaller and shallower than most folk classic)
Made in China
Channel 24 fret (the last two are cut gypsy guitar version)
Cutaway wide.
Solid spruce
Back & Sides: Solid Mahogany
Rosewood fingerboard, inlaid with "tree of life"
Mechanical oil bath Grover
Hooks for strap on both sides of the body (no need to tie the strap at the end of the handle)
Satin => run fast.
Presence of a beam in the body (inovation from EP7) to reduce feedback.

The guitar comes with the latest D'Addario strings, ESP26 (long, very good sound)
In addition it comes with a fly-box (around $ 150), so no need of negotiating with the seller. (Warning: the fly-box is no fiberglass => ca protects shots, no waves shock.)

Fishman has two microphones, a microphone on the neck and one in the body (aura)
Works with a 9 volt battery
Equaliser treble, mid, bass
Tuner (very fast grip)
Phase adjustment, anti mode feedback.
Emulation of 6 microphones known editable. The six positions are well paid for my taste, the user will issue especially if one wants to pre-program his guitar (both use a pedal like Pandora Vox). Personally, I left the program by default

Interestingly, the preamp has a security: the battery is enclanchée that when a cable jack is plugged into the guitar
=> +: No risk that the battery leaks
=> -: You have to walk around always with a jack on oneself in order to use the tuner.

The guitar is light and shallow, providing a good grip, gathered both sitting and standing with shoulder strap.

The neck is fast matt varnish. It is late, stuck at the 15 ° freight, and the cutaway is wide, making the last frets easily accessible.

The strings are neither too high nor too tight (watch a regular electric guitar will still be surprised: it's hard to make a bend of more than half a ton => it's a folk)

The preamp is easy to use even without reading the manual, so that we do not try to change the factory settings (emulation mode).
The tuner is very well done, because it is analog (the LEDs light up s more or less strong according as it is far from the desired note or not. It lends to the height you want (drop D ...)).

-You have to lug around with a jack to use the pre-amp (tuner), which is sucks when you want to use the guitar to dry
Perso-I did not understand how to change the settings for the emulation of microphones and j'peur all trying to screw up the wild.
-If the guitar is light, all with fly-box is heavy
-Y 'is no protective plastic on the table so the maniacs like me must be careful not too let go at the stroke of pick.

Well I quibble, in all there are not much to complain, it was worth the money.

This guitar sounds warm enough for folk, which is a good place for me now to see everyone.
It sounds slightly less (less serious circles) that the Takamine TAN15C (same price), dry.
Now she is really oriented Thurs connected, and an AER Alpha 40W is already something else. Indeed the preamp has left the concurence a big step back.

- J I bought an amp from AER compact60. connected, the sound is incredible. Programs allow preamp have a range of different sounds that will delight all users are.

The strings do not freesent, the harmonics are easy to go out, she would like the agreement at least two weeks, nickel, she has a great sustain.

Note that despite the central beam, which reduces vibration, and the Grand Auditorium size, it sounds louder than a lot of folk dreadnought or jumbo (unplugged of course).

A very good guitar and very nice too.
It's been a year now I have the choice and I remake it without hesitation.

A dry is great but I think that it is especially the face once with the competition if you want to play it plugged in (the whole structure is made of this light dasn).
Did you find this review helpful?yesno
»

syl2412's review (This content has been automatically translated from French)

Ibanez EP9
4
Does everything said in the opinion Previous.
Excellent design. 24 frets, which is rare for an electro, tell the truth, I've never seen others with many boxes.
Clean finish, very good electronics, very nice aesthetic. A true work of art by itself.

The guitar is lgre and comfortable.
The handle is, as very often in Ibanez, a great ease of play. I feel like I have an electric guitar neck by hand. Anyway, it suits me perfectly. Very good access to acute. Not surprisingly, given the use of guys who sign ...

The tuner is very well Designed with variable intensity LED Emitting, very practical and specific on.
The Fishman Aura prampli dowry of a system that feedback suppression does not work too badly. Practice for the scene.

It sounds very good dj unplug (although the box is a small folk + standard), but his strong point is the sound branch which is exceptional for a guitar this price range. I t Completely bluff his sound (plugged into a Marshall AS 100 D).
It has sustain that lasts all week.
The prampli can easily find a good sound.
6 modes available.
I already tried several electro Ibanez, Yamaha, Takamine, Cort, ... none sounded as good once branch. They all taient far, very far to see Behind. But it must be said that some were resting in a lower price categories between leve ...

I could try it on a Marshall AS 100 D and a Fender Acoustasonic Junior (Personally I prefer the Marshall). I fell in love with his aesthetics, comfort and sonority of his branch. Since I can not sleep, I do not eat, j'conomise ... Joke part is my next purchase of guitar and the more the better tt.

Here it is, I've purchased. I am very satisfied except that I have to change the regulation of the focus plane and handle the bridge saddle by half! The string action silent incredibly high from the 10th fret. Jouabilit now is excellent. Too bad he had to have that setting. At the price I could expect dbours an instrument better rgl.

edit of 28/04/2011: With the use of a strap, jack / strap-lock tends to dvisser and is very difficult because of the beam CASC antilarsen the interior of the box. It took me to disassemble the prampli to tighten the nut of the interior! Next concert will be on a stool ...

These little problems make me lower the note.
Did you find this review helpful?yesno
»