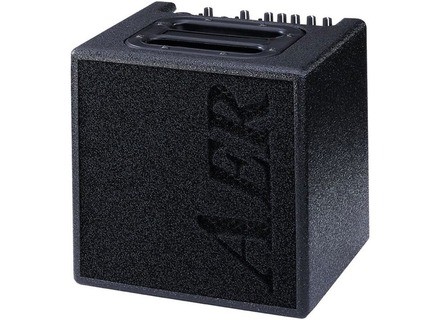 elgioz's review (This content has been automatically translated from French)

AER Alpha 40W
5
It's a small amp 40 W. No heavy and very practical carry as it comes with a tuit. The rglages its simple but ffective. A good reverb. Between a jack and jack between and / or microphone.

The use is very simple. You just connect.

I use this amp with an electric guitar jazz.Rien type better!
He comes out exactly the sound of your instrument without breath, without larcnes ... just pure. But of course you need a good grate. Sometimes I pair my EAR with overdrive pedal (very rgl lgerement) and the sound is there.

I use it for two years and not a problem.
In jazz, Manouche, funk, it is effective and not afraid of anything from a height of 40 w, not even a bateur enraged. It is a little chre but we know what we achte: a incomparble quality. Easy transporting, it's the amp's "gig" and travel.
I tried both a music more "hard", and I was given the limits. We can not have everything.
Did you find this review helpful?yesno
»

Tonton.Babar's review (This content has been automatically translated from French)

AER Alpha 40W
5
Amp transistors, 40W, 1 speaker
A combo between Mic / Line with power supply for micro fantme
Between a guitar with attnuateur
An effects loop
1 connector for pedals on / off effects
1 x DI + 1 Line output (DI output can be used to connect a tuner, if not taken dj)
Qualiseur a 3 band gnral (too bad there is no one in between qualiseur)
1 rverb intgre
A gain per channel + 1 volume gnral

small but sufficient to "rveiller the dead" ... Despite its appearance "playmobil" lol

Config extrment simple, user manual that I used to not know that the effect triggers the rglage rverb intgre ...
In short, if you do not use external effects case, the usefulness of the s'arrte manual.
for sound, I use it with my classical guitar La Patrie (team a B-Band), I put all qualiseurs zero, and sounds! I prfre possibly change the legalization of the B-Band ncessaire but if I think trs superflux ... (Or volume may be lev?)
otherwise, I also tried with my microphone (Shure BG3, Sennheiser e865, Rode NT3) and yet impossible to take into default, was amplified, and as long as it's acoustic he can do!
complter for testing, I also connected via the line input on my keyboard Roland G800; verdict: trs well on the acoustic sound (very good samples of the keyboard) but catastrophic sounds typically electronic) I also tried an organ numrique (Viscount Cantorum 2) and also trs good!
home, it serves me well (for lack of space) to amplify the audio (I put my CD in my MacBook) and it is also good on vocals trs but still pretty average on music Fawn "hydraulic press" ... lol

Okay so it's clear, it is clean and the attack is not too violent (much softer than the Roland AC-60.
I did tests with my La Patrie classical guitar (a team of B-Band).

Note that I use no effect on it.

APRS DIFFERENT trials with several guitars, I realized that the prampli is + or - adapted to the amp ... my guitar does not terrible on the Roland AC-60, whereas the same with the trs prampli Godin is really good on it.

Anyway, all the acoustic amps I tried (AER Alpha, Roland AC-60, SR Jam150, Marshall AS-50), and regardless of the guitar, the AER is the one with the rpondu my best expectations, some amps taient best sometimes, but not on all the guitars while the AER is good everywhere. + And, despite its size toy, it is complete and successful!
And for use with a microphone, the voice goes well and is perfectly intelligible.

I've had a few weeks and it's a little thing I'm happy trs, and it is very small (IDAL a tidy studio in Paris) but efficient trs (great for nerver neighbors. .. lol). + Being in fairly lightweight (6.5 kg), the bag-cover makes it extremely mobile. Convenient as it attaches to a mic stand screw 3 / 8 ". For such a small appreil, connectors and trs rglages are complete even if one would qualiseur by between t a good idea (but o to see the size? lol)

Before making my choice, I have tried many other products (Roland AC-60, Marshall AS-50, SR Jam150, Crate, Ibanez ...) but beware, even if it takes other Drage's high on paper, nothing beats a try. The choice was not too hard t tell the truth I have bein hsit with the Compact-60 from the same brand ... (But the price is the brake was a bit especially for the diffrence between the Alpha and the Compact-60: 20 + watts which I did not need, and an input for qualiseur e. ..)

the only true default: the price! 40 watts but it is tough on PPRE! (And yes, it competes handily with SR Jam90)
it was really a feeling of quality by using it, and it's fun! THE FIRST use, appearance reminds a bit of a toy and then after a few notes, the toy sensation turns to finally be really shave.

a little anecdote: I was singing a solo in my Sennheiser e865 coupled, it is in principle against plutt all systems PA to sing but she does get along so clearly bleuff and also in the Alpha course ...

If I had a Godin prampli on my guitar I might be chosen Roland (much more complete but not more powerful), but I do not want surout Spar me my guitar, I ' I chose no problem and I reselect the Alpha AER (or default the Compact-60)
Let's say this unit is part of the standard that achte, and we care!

Well, I will give you my opinion if the news evolves on this amp! cheers

outremer's review (This content has been automatically translated from French)

AER Alpha 40W
5
Amp transistors, light very powerful, 40w, but it covers a huge soundstage.
Two inputs, the channel "guitar" has simple but very specific settings, the reverb is very effective.
It comes with a carrying case, nice, you can put the jack, ?

Simple: one branch, its rings! Settings bass, treble, midrange is really to refine a max ... but in the middle ... it sounds already! I play an ibanez nt af105f is enormous. I do not want sound too dark, and the AER alpha perfectly preserved the acoustic characteristics of the instrument, with good dynamics. Compared to its big brother, the compact 60, it seems to me less "round", the more nervous I find it more.
The manual is simple, but completely useless! There is nothing comliqué is not in the philosophy EAR!
It is to ring ... and sounds!
Its size makes it a light amplifier ideal for repeat, for small rooms, the outputs on the back can swing on a sound system. we can take it anywhere, and suddenly, we play more often! !

With an archtop, it sounds ... jazz! Like no other amp tried before. The attack is soft, there is round, plus a touch of nervousness to the proper switch chorus. The gain pushed too far alter the sound significantly, Personal, I prefer a little more up the master, transplanted in a live sound system is top.
For cons, I do not like the button "color", it acts on Medum I think it is "scrap metal" too ... the sound is more artificial, a bit bland for my taste.
I play repeated with a small big band, hey ben, I spend much! It is very, very powerful.
I also have a Lag Roxanne, solid body, connected it, I rediscover its sonic qualities, with a terrible sin! stunning!
For some pieces, more funky, I branch in place of Ibanez.

I use it for four months, I tried stuff before, tube amp .... I was accustomed to big amps, and its small size baffles me a bit, but after the first test ... I challenged my prejudices: no, does the size or quality, nor the power.
Obviously, we can not sit on it ... well unless it is very small.
I love this amp, and then I like the face of people when they hear what comes out of this little black box!