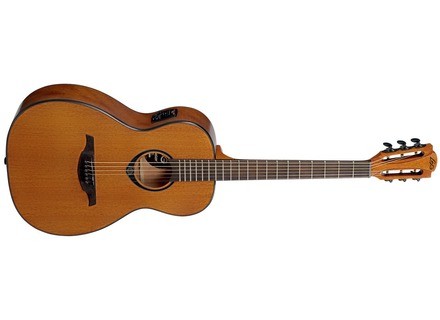 Lâg Tramontane T77PE
4
Guitar French brand made in China.
Laminated mahogany, parlor size with junction body / neck to the 14th box.
With a Direct Lag preamp with integrated tuner for the price it's good to have this option.

The visual aspect is nice, and pretty satin (except the visible parts of internal dam, hewn and vaguely burnt surface, probably as invisible as parts) including the black binding on the edge of the table, and black on a mechanical head aesthetically pleasing.

Like most models of Lag Tramontane series, the neck is thin and easy, and the varnish seems good - at least it is nice to the touch.
The action on my model was set very low: a comfortable game at first, and a pleasant sound as I was playing softly. For cons, I had a frieze intolerable as soon as I was pushing a little on the low E string and the box 1 to 5 (!)

I tried to adjust the handle, but the settings finesse seeming to have little effect, I opted for a réhaussage the bridge (standard handling acoustic setting) good 3 millimeters. Immediate effect, end of the frieze, beginning serious things.

The original string did not like me at all, with their metallic hyper its giving me the impression of scratching on the fence.
I changed my usual type of phosphor-bronze, and after setting I rather enjoyed the warm character of this guitar.
At first, I was attacking the strings too close to the bridge (used to my folk jumbo) and suddenly the sound lacks bass; by plotting the attack in front of the rose, it gets pretty low round with an outfit and an interesting presence given the format.

As the shape predestined there is a typical guitar for acoustic blues, finger-picking or slide much more than for strumming. The sound is quite warm and woody, and she prefers the sweetness of brute force but once properly adjusted, it remains operable strumming if you play clean and precise.
Perhaps interesting for the studio rhythm because the sound is pretty dry, it does not bleed too much.
It still remains fairly strong.

Connected, it works pretty good, it was very nice and low settings are effective, the preamp is a good surprise.

I month. In short a very nice compact guitar and passe-partout, finishes more than adequate for the price, the bluesy and nice acoustic sound - if only one rule, and with a preamp that makes the job which spoil anything.
Ideal as a guitar room or living room, and go again after work its format makes it super portable. Against by attention varnish is fine and was quick to damage the surface by placing just a bit much ground in the subway. So treat him honorably padded cover, rather than the first prize.