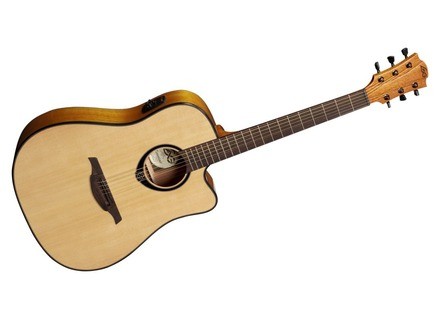 taobe's review (This content has been automatically translated from French)" Fresh"

SlapKid's review (This content has been automatically translated from French)" Beautiful as a brand new truck!"

Lâg Tramontane T66DCE
5
I think China, price floor, mahogany tree-not massive, micro Nanoflex Shadow preamp and direct lag (bass-treble contour-phase-mute).
43mm handle, very well trained for quite thick in the middle for not too tired and well into agreements for the banks to move without asking any question.
Frets fine, two dozen of which 18 very affordable for solos it does it well.

Smart easel, we have finally provided these barbarians ankles of another age ... so easy to climb ropes, etc. removed without tools.
Compensated nut for both ptites strings.

Mechanical oil bath stable, they cast a black max.
In fact, this guitar really threw a perfect blend of class and restraint, as my roxane besides, you'd play a much more expensive.

The body is painted gloss, while the handle is brushed him, comfort level of play is top and the guitar will not look like a wreck in six months ...

Ergonomics is very good, good balance and the credit goes as far behind the left forearm is placed on it so it does not flow off as a smaller box. This is important in the long run.

Refinement, the edges are well rounded body is more comfortable than most acoustics I have had in hand.

The strings are Elixir 11-52 origins, they draw quite strong. Finally for me ...
Waiting to mount a game I fell softer tuning half a tone everywhere and it just sounds good anyway. Idem DADGBD. So well built.

I had the choice between two new specimens, and was elected the cords much closer to the button and a best finish of the edges of frets.
So it depends, but that does not vary greatly.

Like when it's not the massive, as I attack hard solo (plectrum 3mm) the limiting effect is desired, a lower dynamic range. But his constant and more acute under control.

I especially compared to a yam fgx720sce, which proposes to double the price a more pronounced grain and better sharpness, it sounds more shimmer without being too typed D.
Twice the price ...

The T66 is very balanced, the midrange does not drown, the bass do not eat up everything and do not break the sharp ears. Plectrum solo is great, in arpeggios played softly is quite shy but not cutesy.
I do not feather the turkey anyway, nor do horses, so Martin is not for me ... especially at the price or is!

I just played one time on a roland cube 30 bass for the notice and the amplified sound is very very good. Warm and very balanced, no hail at all, it seems not a piezo but rather a b-band in the idea. The preamp is effective (bass-treble are notched in the middle, is invaluable for spotting in the dark), but moderate, so it does not eat the character of the guitar. Well done!

I put ten saw the price, and that's what I want (not solid).

I've had five days, but I spread the good word as the holidays approach. I have enough experience to feel that this guitar is really the ball, and should last.
The sound you will not improve, forcing non-massive, keep this in mind when testing.

I can not believe, with the components and finish, the price of this lag.
I do not know what to ask for more, as I prefer the plated solid and flexible preamp modeling or without preset (and what else eh ...).

If you are looking for a very defined sound with a lot of grain, it's worth it to double for a yamaha FGX720SC (and I tried everything I found below 1000 roros) though.

This lag was a favorite, I thought Wednesday and Thursday, not even the store I go out with! The prevailing thought was that I'd be foolish not to take ...

Update: The handle is fixed at home or godin taylor by two screws on the inside of the heel is nickel for work just in case. The fit is super accurate, it sounds like glue. The impact would be rather on the side of Sustain, down from my copy but gypsy plated with set neck.
I played on neutral amp (hp broadband reverb effect, no treatment other than the preamp of the lag) and it's super hot, not at all piezo duck. So very happy!

"Make Over My Rig" Contest

Published on 11/06/12
HK Audio USA, along with Lâg Guitars USA, VOX USA and Korg USA, are giving you a chance to win a live performance setup in a contest.