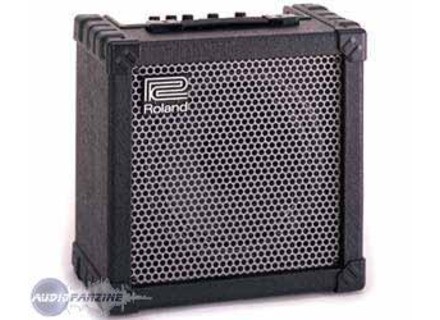 Suits my personal needs just fine. The manual is English and good to go.

I use this amp with Flying Vs--Ibanez VBT 700, Schenker, and a couple of Gibsons. I play thrash, melodic death, speed and technical styled metal. The tone of this amp is pretty close to the larger amps I play live. I purchased the Cube 30 for its size and tone. I put a pedal board in front of the Cube 30 to duplicate my stage tone. It does this very well.

Precision and sound quality are on point. Works well for technical playing. I don't use any of the various models or effects. I prefer my own floor effects to get as close to the amps I use when playing large gigs. Currently gig with Krank, Marshall or JSX heads through Marshall 4x12 slants. The Cube 30 supplements my tone when practicing quietly at home. Occasionally use the rectifier model but I mostly leave it set to metal. The amp is great for intense practice of technique i.e., sweeps, lead work, harmonics, tapping and power chords. Amp has a beefy enough sound, works well with my floor effects, and maintains killer tone at low volumes without excessive power draw experienced with larger amp heads at home. Would buy again based on simplicity and tone. I tried smaller Marshalls, Voxes etc. but the tone wasn't consistant. The Cube is the closest to my personal tone without the need for constant dialing in.

Roland Cube-30
4
Been playing for 15 years, all kinds of rock and blues...I was looking for a practice amp to play in my apartment.

I liked this better than the Line 6, Crate, Vox, Marshall, and Peavey practice amps at the same price point. They all had similar functions (built in effects, 8"-10" speakers, direct recording....but this one SOUNDED best to me.

so far, i've got nothing to complain about. It serves its purpose perfectly. If I were going to try and gig with it, the list would get long very quick, but for me...its got everything it needs.

Construction seems average. Nice little tough plastic grill on it. Nothing's loose or rattling around, I cant imagine that its gonna break just toting it around to practice and/or gigs

For a small wattage combo practice amp with some built in effect for less than $300, this little guy was my choice. I'm very pleased with its sounds and relative versatility. Like I said, its doing exactly what I needed it to do.

Roland Cube-30
5
I bought this amp in store, from a shop called 'Music Matters' (www.musicmatters.shop) in Lisburn, N.I.

I really love my cube. It has great power for a 30 watt amp. When you turn it up loud, it doesnt buzz. It's also very easy to use, you can get the hang on if in a few mi utes, simply by playing around with the controls. I really like the built in effects, ranging from 'acoustic' which sounds just like the real thing, to 'metal' with heavy distortion and loads of grunge. These effects are good quality, and them being built in means you don't ahve to fork out another $100-200 on an effects pedal. I also like the various controls being on top, allowing maximum speaker size, without bringing up the overall size of the amp up, meaning its a more transportable size. I could keep going on the plus points for quite a while, belive me, theres plenty!!

I really can't find much to fault on this unit at all. It sounds great. The clean channel is very clean, the distort is as distorted as you like, and it has nearly everything you would want in between. My only fault is that it is quite heavy for carting around with you, but really, for what you get included, its not really an issue, and to shed some weight, it would have to lose some of the effects, so really its only a small sacrifice to have it heavier.

The cube is as sturdy an amp as I have seen in a while. Its tough, solid and well built. I haven't damaged mine in any way yet (nor would I try!) but I would say this amp could withstand quite a bit of rough-and-tumble.

Overall- its a great amp. There are few things i can find to fault, and even these aren't too big a deal. It sounds great, and its built in fx means that it saves you money, as you dont need an fx pedal. If anything happened this amp, I would buy a new one. I would recommend this for home practise, band practise sessions and even small gigs, as it can go damn loud without loosing quality-just ask my band mates!!

Roland Cube-30
5
I paid SGD$300 for it, bought it at Swee Lee MFO. My old Ibanez TB-15R was getting a little, small, and it didn't have any of the effects found in the Cube 30. Bought it brand new.

Really great unit. Powerful, small, and has a huge amount of effects, which is very useful. The COSM is really clever, as it allows the amp to model the sounds of many other different amp, such as the MESA/Boogie Rectifier, Fender Twin Reverb, Vox AC-30TB, the vintage Tweed Fender Bassman 4x10 among others.

Nothing, cept when I turn on distortion and chorus, the sound comes out as though I was using a flanger/phaser combo. But I don't think you're supposed to use chorus with distort anyway...

Really good. Hardy piece of equipment. Dropped it once, still works fine. A little heavy to lug along on long distances, but hey if you want quality, you gotta compromise.

This review was originally published on http://www.musicgearreview.com
Did you find this review helpful?yesno
»
Read the 23 user reviews on the Roland Cube-30 »

Roland Cube-30 manuals and other files