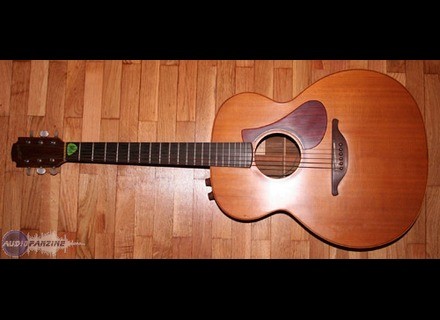 All user reviews for the Lowden G-7

Lowden G-7
5
This is a Lowden guitar. These guitars are made in Northern Ireland by highly-trained professionals, and as such, every guitar I've ever played of theirs has been phenomenal, this one included. The guitar is acoustic electric, and it has a volume and tone knob on the top of the instrument near the neck. There is a pickup inside the body of the guitar. There are many frets on it, but they aren't all playable because there is no cutaway on this guitar. The guitar is made from a rich mahogany.

There is not, unfortunately, easy access to the top notes. However, this is a minor complaint, as the lack of cutaway gives the guitar more resonance, or so I'm told. Also, this isn't the kind of acoustic you would want for lead playing anyway, not that there are many that are particularly good for it anyway. Either way, the guitar sounds great from the minute you play it. It's got a nice shape to it, and it's certainly not too heavy so it's easy to carry around. The playing on this acoustic guitar is some of the smoothest I've ever encountered. Now I know how Richard Thompson can physically play "1952 Vincent Black Lightning".

I love the sound of this guitar. It's got possibly the fullest, most balanced sound I've heard from a guitar in a while. It has plenty of low end, but not in a booming, woofy kind of way. The midrange is nice, it doesn't have that wonky kind of abrasive mid-rangey sound. The high end is brilliant without being shrill. It sounds great for strumming with a pick, with your fingers, or the fingerpicking style of playing. This guitar needs to be played to be believed. With the right microphone, this thing sounds immaculate in the studio. Live it sounds less brilliant, but then, so does almost every acoustic guitar.

I like the sound and the playability of this guitar the most. The only minor complaint I have is that the pickup that is inside of it doesn't really hold up to the sound of the guitar when it's played acoustically. There are few, if any guitars that I've found can do this, but it's a shame considering how great the thing sounds acoustically. This guitar is going to run a fortune nowadays, but if you are a professional it's worth it. There aren't many guitars that are up to its caliber, at least nowadays.
Did you find this review helpful?yesno
Cookies help us improve performance, enhance user experience and deliver our services. By using our services, you agree to our use of cookies. Find out more.