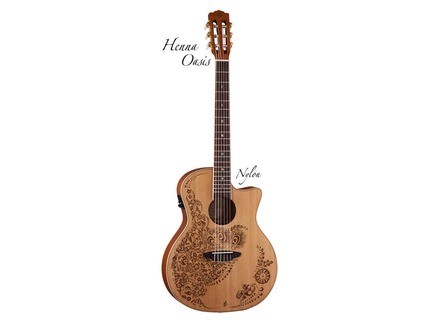 heads on fire's review"Places more emphasis on cosmetics than performance."

This is a cool guitar from Luna. Not necessarily a good guitar from Luna, but a cool guitar. It's got a neat look - it is definitely distinctive, will be noticed, and will get attention. It will be talked about at any gig, and probably any practice even with band members that have seen it 47 times. However, it's just an average, run of the mill instrument in terms of pure performance. It doesn't play super well, but it doesn't play poorly. It doesn't sound great, but it doesn't sound bad either. It's just nothing to write home about, unless looks are paramount to you.

It sounds like an acoustic guitar. It's a bit muddy, not a lot of clarity in the upper mids, and it doesn't sustain very well. But it sounds decent enough plugged in. The neck has to be fought just a bit, so it makes the sound take a bit more effort than normal to achieve, so it doesn't really have the best subtle quiet tones.

Eh. It's alright, but it isn't really a special guitar. Maybe I'm just not the intended audience, but this guitar does not do it for me. Luna Guitars has historically marketed guitars toward females, particularly young ones, and I definitely do not fit the target market demographic there. But I'd be ok with this guitar if it played well or sounded well, and I'd hate it if it played awfully or sounded awful, but it is none of those things. It is just a middle-of-the-road instrument with a cool looking top. That's it. Nothing special.
Did you find this review helpful?yesno
»