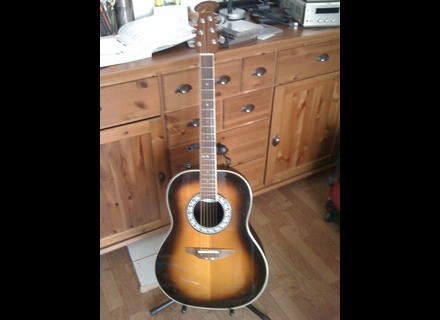 Ovation Ultra 1517
This guitar was made in America. It has a rosewood neck, and a spruce top with a walnut bridge (which I've never encountered before). It claims to have 25 frets, but you can't reach a few of them, so in practical terms it has 22 or 23. There is a Piezoelectric pickup in there, and there is a knob to control volume on the top.

This is one of my biggest problems with this guitar; no cutaway! It's so hard to reach the last frets! I don't particularly like the sound of it, either, regardless of whether it's played acoustically or plugged in. Even through an amp, which I love the sound of with acoustic guitars, it still sounds pretty bad. The curved, smooth back makes it hard to play sitting down, since it tends to slide out of your lap while playing it! I guess it's not a bad guitar to bring around, since it sounds bad and is light. It's also really hard to keep it in tune, I've never used a walnut bridge before but I think it's pretty weak.

I've used this guitar with a few amps, including a Crate Blue Voodoo Head, and a Marshall JCM 600. I haven't had a whole lot of luck with any of them. I just think this guitar sounds bad. It has a flat, uninspiring sound. I prefer acoustic guitars that have a sort of jangle, or a ringing, bell-like quality. This guitar just sounds flimsy and thin. There's no way around it, either. It doesn't suit my style of music, and I hope that nobody I have to listen to disagrees.

I'm not a huge fan of these guitars, obviously, so I don't have anything I particularly like about it. If you need a guitar that you don't care about and can allow to get damaged, this is probably a good one for that. The sound is bad, and it's not really that great of a value. I've heard that it was discontinued, and that's for good reason. I have tried a few other Ovations, and I don't know why I chose this one. I remember it sounding the best of all of them. Maybe I should have been looking at other guitars, because there is no way I would buy this again, or recommend it to anybody.