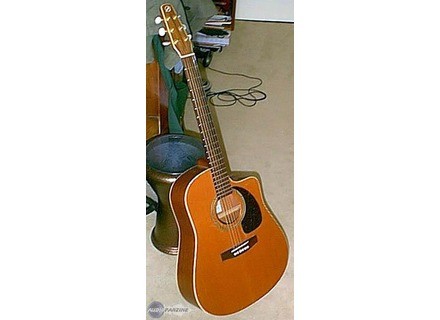 Good access to acute
The handle is big enough, it's hard enough guitar to play especially for a beginner. Have to hang on the bars or play the thumb!
The body takes a lot of room but it is less worse than a jumbo. It is an intermediary between dreadnough and a small jumbo.

The sound is very powerful, very medium. Agreements fart enough to play in the street.
Picking suitable because the notes of the strings stand out from each other.
Was a Jazz guitar under the original, so accurately in the notes (but not limited to this style).
It has less the feel of piano chord on a Gibson, for example.
The sounds of strings are in my opinion excellent and are in this price range the first to compete with Martin or Gibson.

I use it for 6 years.
What I like least: the handle is hard enough to play
What I like most: the sound, perfect for a guitar of this price.
As a mahogany version, the sound gets better with age. IL approximates more and more of a soft sound to the Gibson and the harshness of the early years (while medium) gives way to a more velvety, more consistent.

I tried a 40s high rise before the election, and the only one to compete with the Gibson and Martin to more than € 1500 was this guitar.
It is compared with the Martin D18 with which it has much in common (solid spruce, solid mahogany back), while two times cheaper!

The price / quality is exceptional (<€ 1000)
Did you find this review helpful?yesno
»