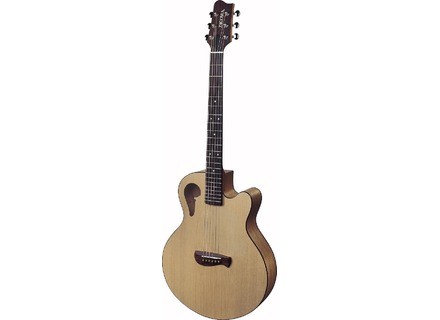 Its sounds like no other, Great maodern tone, bright, balanced and unique. Cuts through all other guitars. Project very well. Volume is amazing for a guitar of this size!

Tone and simple elegant look. Stands out in tone and looks. Well built and Very balanced. Has a electric feeling neck Wide and flat! Plays like butter.

TOP NOTCH!!!! Not a single flaw anywhere! I'm amazed at the wood selection for the price. Nice work through and though!

This is a very great guitar. It will not let you put it down. Not a clone guitar...It has an inspiring feel and sound. A joy to sling over you neck. Very light. Fast action Big loud sound in a small package. This guitar will simply walk on the big axes. Plug it in an hold on!

LimiterOff's review (This content has been automatically translated from French)

but there are no external adjustments. The seller told me that the preamp is poor and the one he prefers, although as a rule he prefers to use only the settings on the amp.
I chose among others because it is super nice. Wood is beautiful.
What is surprising when you see the first time report on the Internet or the mags (I saw it the first time in a guitar mag acc.) Is the size. It is smaller than access the guitar you see in the store usually.

The playability is amazing. We feel quite a difference. Access to acute is no comparison with a cutaway folk obviously not. It is made to play nervously, like gypsy etc, and filled with great role. I love playing "has the electric" above. It's exhilarating.

Sound is a beautiful fall. I play lots of different ways it because I like having lots of strings to my guitar .. er to my bow. I amplifies the moment with an amp electric lamp has peavey classic 30 or directly on the sound system. It is on the elec amp is not the best but still love the sound. The game seems fluid as you can hear every note clearly.

I qq months since, and have done with that, but I can not imagine having another guitar. I wanted to buy time for a good guitar, even pay a bit expensive. I tried quite frankly a model that had little to say, or at least that does not really suit me. This guitar is now part of my image. It is not free and not easy to find but I'm happy because it helps me contruire my little world. Is this the guitar you need?

Tacoma Guitars Chief C1C
4
The detail of this guitar is pretty easy to find:
http://www.tacomaguitars.com/products/view_specs.php?full_partno=0381100&name=Tacoma 26reg%% 3B + + C1C Chief

The preamp Fisherman PREFIX PLUS is a marvel. Notch setting is extremely effective in its role of filtering the feedback while remaining transparent enough to the original signal. It filters permanently at-15dB over a frequency range of 40 to 500Hz, if any critical range with respect to the serious larsens often the biggest problem on the electro-acoustic guitar. In addition to this adjustment, which has 5 sliders 4 in the alignment of the guitar and the 5th to the perpendicular.
The first 4 are: BASS CONTOUR TREBLE and SHINE
The first three allow adjustment -12 / 0 / +12 dB and the 4th -9 / 0 / +9 dB.
BASS slider is centered on 60Hz and specifications announces action to + /-3dB to 350Hz. I am unable to calculate how slope (dB/8ve) that corresponds to the ear but I can assure you impeccable musicality as much efficiency as foolproof. It should not overdo this setting because serious very quickly become labeled m ^ m if they are actually very docile (including through the Notch).
The TREBLE is given to a focus on 10KHz and also acts to + /-3dB up to 2.4 kHz, while SHINE, also centered on 10KHz but + /-9dB to act on a range of 7 kHz + /-3dB.
All this is already very interesting, but the "MOST" of PREFIX is its setting CONTOUR and is actually adjusting the level of a semi-parametric filter whose fifth slider I mentioned above happens to be the frequency selector. The latter simply stamped Frenquency allows to act on a range of 250Hz to 10KHz all with a Q factor equal to 0.5 which gives a very musical action without aggression but by being there as particularly effective.
A phase switch and an LED indicating low battery power (lights from 6.5 V) are close to the table with this preamp, otherwise the battery replacement is extremely easy and rapid since the preamp switches to full once unlocked, leaving us her electronic innards. The battery is simply clipped on the PCB using a pair of plastic claws, unfortunately, a little loose which can result in collision of the instrument, inadvertent disengagement of the power source. But, as you will see later, we will quickly develop good habits especially not mistreat the beautiful, which will both safeguard the good performance of the stack, but also to protect the dress of the guitar is, you will see, very sensitive, or a single shot.

For the violin part, note that the handle is screwed to the body which is not very common in the field of acoustics and Elecro.

The hanging ropes on the bridge is not the m ^ m on my copy of the photo on this forum or those of the site builder. Indeed, the photos in question show an attachment via conventional ankle while on mine, what are 3 small slits in an arc or a half-moon that enable the selection of strings 2 by 2. We slip the ball retention of the rope in the slot through the widest part, then we slide towards the end of the crescent moon. It&#39;s very convenient and fast. No need for tools to remove the pins.

My copy of the table is seen also added a thin transparent adhesive pickguard at grainy very discreet which takes the form more or less than, mirroring, cutting "Wing" acting as a rosette. The photo builder does not show what kind of protection.

The handle, initially, is what made me fall for this instrument. Being primarily electric guitar, I always had a certain aversion to the idea of ​​hurting my little finger rolls on the strings of a sound course harder to play. But on this guitar, the first few seconds I had the impression of being on an electric as the profile of this race and end and "electric". I mostly play and for several years on a JEM 7DBK whose handle is thinner than other YWAM. And that&#39;s an understatement to say he is fine. And curiously, one of my chief resumes proportions very close. It is a treat! Furthermore, preferring to play softer and measured on this guitar, I did not hesitate to adjust the neck as straight as possible, and m ^ m, to adjust the bridge saddle for almost a game on this electric guitar. I am close to the frieze, but it only occurs for the most powerful attacks, and frankly, it does not bother me more than that. Obviously, it&#39;s the comfort of the instrument that is within m ^ m vein. The baby jumbo size gives the Chief a sense of ease that I had rarely encountered before except on Lag-Baby Jumbo (correctly) and a Takamine EF-221 (really sure of the reference, but I had failed to buy 3 or 4 years before my Tacoma).
The single cutaway is obviously a marvel for access to acute, but the Chief requires a careful adjustment of harmonics as it is, my copy at least, relatively sensitive. It is therefore useful, even vital, to refine the settings according to the compensated nut pulling strings used.
The fineness of the handle obviously plays an important role in this problem since the newton applied by the lower left hand on the stick caused a significant change in the tuning that is very reliable because it says the mechanical Gotoh oil bath.

Extremely versatile, I can safely use this guitar to address styles as diverse as Jazz, Pop, Raggae, the Gypsy (also sound very nice for this style) and many other things. The pure acoustic sound of the Chief is already almost perfect for my taste, but the preamp finished as soon as I fill my branch. I use it mostly well connected to my preamp / multi-FX Axe-FX modeler at Ultra Fractal Audio System is just a killing in this context. But sometimes I connect it directly to the sound, the sound card, or m ^ m, Loopstation my RC-50. In any case, it always sounds perfect.

In pure acoustic is already the splayfooted. The position of the "canopy" wing-shaped leads an incredible presence of the bass as the format mini-jumbo is probably balanced. I guess because a dreadnought or jumbo size would in all cases produces too much bass, but that&#39;s just magical! And where is incredible is that the ear of the guitarist himself m ^ m is not the only one to benefit from its low since this particular positioning of the rosette literally projects the grave later in the piece. The soundboard is at once free of any perforation in the usual place and time, it gets a free shot of phenomenal vibration that I found on any other guitar. Only the old D45 a friend had left this kind of feeling. And the whole spectrum of the Chief who benefits from this particular construction which also gives it a look especially valuable.

So I can cover all spectrums I need, whether for me or m ^ m for many guitarists I get home in all sessions and generally fall under the spell of the beautiful to the point that until now, 7 out of 10 guitarists in my past have finally cracked a Chief.

The sound quality on this guitar is just enjoyable, especially with a good static omni or bi subjective engagement (located just above the right shoulder of the guitar) and just a splayfooted supreme. The versatility of Fishman does not rest and I often mix the results of these two takes her to really cover any register.

Purchased in 2003 or 2004, this guitar not disappointed me on one point: The fragility of its surfaces. Indeed, the finish is largely acoustic sound of the Chief is unfortunately very thin, losing its protective quality to the passage. The slightest shock of the blow forever mark the instrument. The transparent adhesive pickguard is a necessity if m ^ m, in my case, I never touch the table when I play pick. It is an important detail to consider, as recent models are not equipped as standard with this pickguard, and some specimens belonging to my clients age of much more quickly than it should.
For my part, I use this instrument in the studio and at home, I took him never live where I prefer to use a Variax acoustic sounds. But whoever wishes to play on stage with her must know what to expect. Especially in my case, unlike the current and recent copies, my Chief was delivered to me in fleece cover (very good, certainly, but not the current hardcase) stamped Tacoma Chief with a nice feather Indian.

It still remains one of my best purchases, especially if one takes into account the fact that I took advantage of a local store stocking which allowed me to acquire it for a little less than 600 €.

In short, the look may not appeal to everyone, the handle does not suit some, but it is important to test to see what it actually offers.
After this step, go for it!