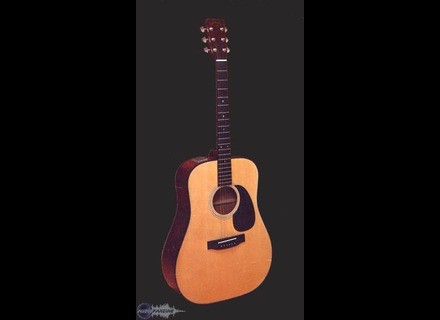 Takamine EF340
5
Made in Japan, true copy of the Martin D28, to say, the logo is not the current takamine but a form with Martin East. Below 1962, issue copies are not any better!

I have no idea what kind of wood it can be, I would say for the mahogany neck, rosewood fingerboard, the rest says nothing to me.

20 frets, a bit old for me, but hey it will change later. There is a mic inside it has a volume / gain.

The only problem are the mechanics, the one I had with, I think it is those origins, were really pitiful. They were shaped like a mechanical oil bath but when I dismounted I saw they were not closed, I replaced by those of my Takamine G320 (so pretty standard), and there can be really judge the guitar. It takes better agreement, and recovers strangely acute (may be as bad engrendraient mechanical loss of his?)

Especially since the argus is variable it is found at all prices.

Eats very pleasant, well it is a matter of taste as for the rest, but it'' s format buche Canadian, he is well in hand.
The key is nice, I can even leave a little bluesy solos which is cool for an acoustic.
The rest of ergonomics is semblabe has any sound, yes it's big, yes it makes noise, so you can not Schredder above!

Get a good sound: play on. Harmonics are beautiful, endless sustain, the true acoustic sound I love. I have a J200 which I am less a fan, then I found the sound of City & Colour I love, missing boots and a plaid shirt.

Connected to the sound, I can hardly judge, I have a hot rod deluxe which is not very suitable. I think with a special acoustic amp can draw sounds much better.

Well, it'll be a bit repetitive.

It's like an old Martin except it's made by Takamine, less expensive, so cool, so it's good, so here goes.

The rest I said before, there is not really sound that I dislike, because it only has one.

I can just clarify that its volume capacities are quite substantial, it still is cool.

I use it for several months.

I do it again this choice, if I fell on another hand I repeat.

I was in the hands of many model (we train in all music stores), but I really started to get a true opinion a Takamine G320, a Martin D00 and a Epiphone EJ200 (United States) and it remains by far my favorite.

BertiB's review (This content has been automatically translated from French)

Takamine EF340
4
Guitar factory in Japan in the 80's, 20 frets,
Electro-Acoustic with just one volume and one potentiomtre tonalitbr /> No coupbr pan /> bought used in 1989
The woods are beautiful, and reliable mcaniques prcises and finish overall is good to note or

Very enjoyable round the strings rglent very low with no wrinkling. For a guitar over 15 years of violin making is still not perfect problem of race or mcaniques.
The mcaniques are very very good agreement
Only small default strings (even in amounts Xlight) are very tense
Jouabilit the "solo" was not exceptional I put 7 / 10 (I tried other folk are playable in most other hammer and bend and pull off than the)

Then I'm still bleuff!
in pure acoustic: This guitar has great sound extremely rich in harmonics, very fair all boxes
In electroaccoustique: the sound is very beautiful but also a little dry and tend it must settle acute knob the guitar and the amp so that it does not sound too metallic
Through a non-reverb and amp to go live in the PC is also very well

Premire C'tait my guitar and I knew nothing. I think I got a good deal. A guitar that sounds as fair and both beginners ...
After 15years and 3 other guitars I still love him a lot and use it often for recording or singing "campfire"
I prefried so rich, it has supported
Today it is better perhaps to take a pan shot is the only thing it lacks