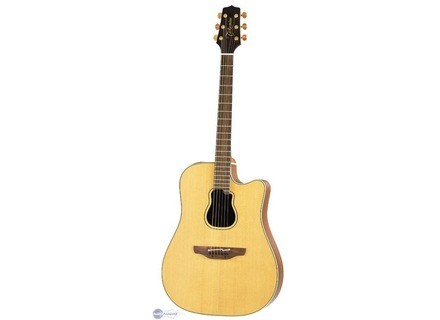 Takamine Garth Brooks GB7C
1
I played this guitar for 20 minutes at Guitar Center on Sunset Blvd., in Los Angeles. It was on sale for $949.

Well, it does catch the eye, thanks to its unusual soundhole and streamlined contours. And Takamine's workmanship is reliable, as usual.

This guitar fares poorly on the two most important traits of a guitar, sound and feel. The extremely narrow neck was obviously designed for fret hands more used to electric guitars, but this neck is even narrower than a Gibson SG's. It's incredibly awkward to play. The acoustic sound of this model is very poor, sounding compressed and tinny. I always test fingerstyle first and this guitar is ill suited for the task, given its uncomfortable string spacing. I thought that this guitar should at least be good for hard acoustic strumming and grooving, but no -- it's not punchy enough for that function either. Most inexplicably, this guitar has entirely the wrong sound for country music; there is no woody warmth. Even Ovations sound warmer than this Takamine.

Good, though it doesn't mean much given the guitar's sonic deficiencies. And I've never liked either the look or sound of cedar tops; I think my dislike for this guitar's sound has to do with the wood.

Don't let the name and endorsement seduce you into getting this guitar. I've played Takamine guitars that cost half as much and deliver twice the tone. If you want to try a country-star-endorsed guitar, try Gibson's Emmylou Harris model.