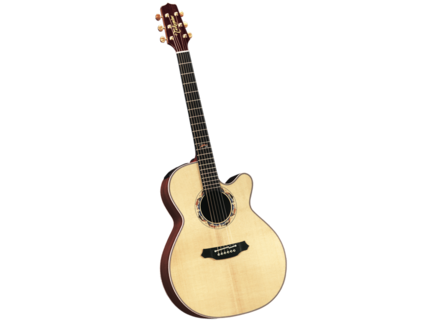 Takamine LTD2001 Dolphin
5
Bought in Wagga Wagga (!), Australia at a small music shop on the main street with an amazing array of quality guitars. Paid about £900 GBP.

I've always loved Takamines. I love their ability to cut through a mix and their versatility on stage in a range of musical styles. So, as I was on the lookout for a new guitar for folk and country, a Limited Edition Takamine in the shop window caught my eye and I popped in to give it a try. Pleased to have found such a gem, I came out with it, and headed straight to a folk gig where it performed wonderfully.

Visually the guitar is a lot more understated that other recent Takamine Limited Edition models. A leaping abalone doplhin on the 12th fret is accompanied by an intricate dolphin rosette in abalone and exotic woods. However, I like this about it and find some of Takamine's recent limited editions a little too flash. The LTD-2001 has a solid rosewood back, rosewood sides and a solid spruce top. The fretboard is ebony, mounted on a mahogany neck. Altogether it is very well put together, was nicely set up from the start and has continued to be so despite a great deal of long haul flying.

I use light or custom light strings as a rule and the LTD-2001 still manages to project well with a decent amount of depth and warmth to the sound. I particularly like the sparkly top end which is great for playing in unusual tunings. It is very well suited to strumming but also performs admirably as a picker's guitar. An all rounder.

The electronics are Takamine's basic Graph X unit. These are adequate and I've yet to cause a soundman any real problems when using my LTD-2001. Clarity of sound is the order of the day with mudiness avoided, but there is a tendency for the electronics to transmit too much treble.

The construction was excellent out of the box and continues to be so three years on. Despite in excess of 30,000 air miles, the LTD-2001 is as beautiful now as the day it was bought. Machine heads are Takamine's own branded and I was a little sceptical of their ability to last. However, they are still going strong, are smooth and reliable, and have impressed me.

In summary - I'm extremely happy with this guitar. It is more versatile than almost any other guitar I've owned and a fantastic workhorse. I suspect this guitar will be in my possession until arthritis sets in in old age. Then I'll be passing it on to my kids!

arold30tenayo's review (This content has been automatically translated from French)

Takamine LTD2001 Dolphin
5
Japanese manufacturing, non-cash boxes 14 cutaway.
Solid spruce top, Solid Rosewood back, sides laminated rosewood as tjrs at Takamine.
Mahogany neck, ebony fingerboard and bridge with.
The woods are beautiful.
Very nice sounding guitar homogene.Elle need still pulling the strings of hard to give full-scale acoustic.
In electro is perfect.
A good year would seem not to be tried at fair value.
This is certainly one of the most remarkable collector that Takamine is produced.

The handle is perfect (Takamine handle for those who know)
This guitar is playable until the last fret guitar as few permits.
The ergonomics are just as perfect, the balance of the guitar is very good.

Played on a good amp and electro is happiness ... with no effect except perhaps some kind of reverb.

I've had about 6 years is a guitar that was worth about 1900 euros to its output.
It has no defect that can be blamed.
All my friends are guitarists tried, none has denied his qualities and yet they play on (Taylor, Martin's and Company)