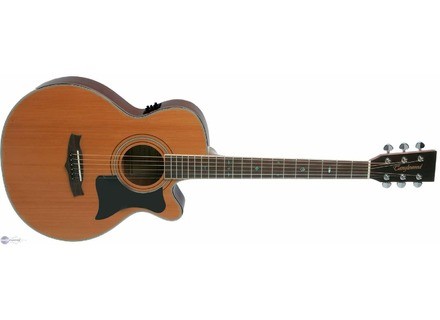 Tanglewood TW145 SC
Flat U shape, mahogany with reinforced neck (which doesn't disturb in the slightest)

Very pleasant (satined lacquer that doesn't stick). It's easy to get a good sound and to access the upper frets.

Test without amp: soft sound, very homogeneous highs-mids-lows. Very good projection for a small body guitar. The highs are soft but you can also make them twangy (non-metallic sound).

Test with cube-type amp: awesome sound! The B-Band A3TY EQ (with built-in tuner) can do wonders (the amp isn't the best match for acoustic purists)

I tested it yesterday and bought it this afternoon.
I always have the harley benton body shape: Folk, classic Cutaway (too big for me)
I've tested martins - Cort - Yamaha, whose sound was very metallic
I tested Ibanez (not bad) - Takamine (neck not flat enough and shiny sticky lacquer)
I play solo accompaniments and learn the rest.

Excellent value for money at the price I saw it online, and it was even better at my local store.
Even without any experience with this guitar, I can confirm that after six months of tests, this guitar is awesome.
Did you find this review helpful?yesno
»

Very comfortable neck, access to the high frets is easy with the cutaway. Much comfier to sit (or lie!) around and strum than a dreadnought. Fit and finish absolutely spot on.

The cedar top gives it a real mellow sound, but you can play it fingerstyle and there's no great loss in clarity; even without nails. It's not a great booming dreadnought affair, but something rather more dynamic.

I tried lots of acoustics in this price range and nothing touched it! It's held up really well to 2 years use and is a joy to play. If you want it to sound brighter (I don't, it's fine just how it is) you could always add a bone nut for peanuts. If you see one come up on the used market at a decent price: don't hesitate. Superb value.

Personally, I have one and I actually chose it because its sound is similar to the sound of Jimmy Page and Robert Plant on the wonderful House of the Holly album.

But also for its design, since I don't want a guitar that looks like the ones used in church on Sunday, especially not in a light brown color. I love the brown of the TW-145.

My selection came down to six models and this one was my pick.

This is only my opinion and I think you should always compare it to other guitars before buying it because, at the end of the day, the sound you are looking for determines your final choice.

What's more, I just replaced the original string set (Dadario 12/53) with an Elixir Light 12/53, which is more expensive, but it is really worth it.

The neck is almost as wide as my Fender Strat, the upper frets are easily accessible and it has a remarkable lightness.

Plugged into the acoustic guitar amp of a friend, it gave me the vibrations I was expecting. The preamp has all necessary controls to mark your territory (Bass - Mid - Hight - Presence - Vol)

It has a rather linear resonance curve, the lows aren't exaggerated and its response to mid and higher frequencies is very crystalline and pure.

I think it has personality. I compare it to a unique piece within a collection, because its value for money is unbeatable, +/- $600 to have virtually a high-end instrument.

The only drawback is that it doesn't have a fixing point for a strap.

It has everything to become a standard

It offers a very wide sound palette, depending on the settings of the preamp.

Exceptional value for money. I don't regret my investment at all.
Did you find this review helpful?yesno
»

Tanglewood TW145 SC
1
Don't make the same mistake I did. I sold it after one week. It doesn't really have anything to offer. The sound is awful. I wanted to buy online and I regret it.

.
Did you find this review helpful?yesno
»
Read the 6 user reviews on the Tanglewood TW145 SC »