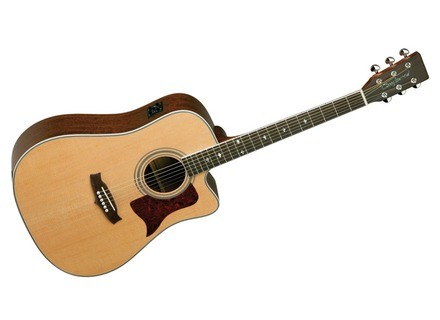 Tanglewood TW15 NS CB
5
This is a British guitar, made by Tanglewood. They've claimed to be the best guitar manufacturer in the UK, but as Northern Ireland is in the UK, and Lowden is based in Northern Ireland, that's a dubious claim. They are, however, quite spectacular in their own right.
This guitar is acoustic-electric. It has a volume and tone control on the top part of the guitar. The body is made from mahagony, including the neck. The top however is made of spruce. There's an ebony fretboard as well.

There are 14 frets before the body of the guitar crosses the threshold, and six after. That's not really too much of a problem, though, as this guitar is not cut out for leads in the higher registers anyway, though they do sound great lower on the fretboard. This guitar is easy to make sound good, both plugged in and acoustic. It's not too heavy at all, in fact it's rather light. Everything about playing this guitar is easy.

This guitar has a fantastic sound to it. It's got a rich and deep sound but it's also quite bright. I'd say that really heavy, sloppy strumming is probably not the way to go with this guy, but light picking, light strumming, and fingerpicking would sound good with it. It has a great balance of dark and light tones, with a great amount of midrange. When plugged in, it doesn't retain quite the warmth that it projects when played acoustic, however this is a common complaint with acoustic-electrics. I'd say that I'd honestly prefer to leave it unplugged if I can, that way I can enjoy the superior sound. It suits my music pretty well, I tend to play a hybrid of flatpicking and strumming, as well as the occasional finger-picking tune, and overall this guitar tends to work for me. Somebody who strums harder than me, however, will not probably dig it as much.

This is a seriously awesome guitar. As it's not that expensive, I'd say it's a pretty great deal overall. For a guitar that sounds this good in general, it's not really a bad purchase at all, and on top of that, it's acoustic-electric, so you have the benefit of using it live too. It'll sound good enough for most gigs, honestly. I highly recommend checking them out, they're tougher to find in the US but they're pretty getting pretty big in the UK and the rest of Europe!
Did you find this review helpful?yesno
»

haroun's review (This content has been automatically translated from French)

Tanglewood TW15 NS CB
5
Guitar produces the "United Kingdom" ... OK a good means United Kingdom but we will not know exactly o ...
20 frets, 3 A Dual Band T.
Bass Medium Rglage Treeble and Presence, trs simple tuner diodes
Saddle and Nut Bone
African mahogany guitar, which is important because it is more dense, "harder" than other Mahogany.
So we have a sound that pulls Rosewood, more "spicy" than other Mahogany.
The table is said to be in Amricain Epica, and indeed the particularity is that it is not as clear as picas which we are used and an amme aspect " piququot, as if he had taken the humidity ... but in fact seem to be aa really a pica of commencement of high quality.
This pica "colorquot; also provides a readily ct least nine guitar, and satin varnish accentuates the Aesthetics pretty sweet.
Handle very fine, enjoyable trs, trs class ...
Probably African mahogany provides the fine because of its hardness particulire.
This handle MRIT 10/10 alone ..!

Truss rod in the handle,
Access in acute pan thanks to coupbr /> Lightweight, guitar balance
The one: that's the trick! I do not play that sound, and frankly, I had a Larrive dernire the Anne and I met with the Tanglewood production levels, and especially its comparable ... for 580 euros ...!
Come on, there is a little less of that ring frquences serious (high-end guitars Chres trs), as if we were playing 2 or 3 guitars one of the ct other, but against this I find much easier to play Tanglewood level set.

I play mainly in open tuning style trsrsonnant, trs open, and solo pretty incisive: hand if we look for kids in low premium, (which will be the "moitiquot ; high-end, which is not bad and gives DJ a balance especially in front of a microphone in the studio), all sounds are really good Defines, prcis and "acoustic" .. .
I did not use an amp.

I for a month, and frankly, I esssay lot before buying it ...
Ads, stores left and right ... finally a store in my little city commuter had just received a 4-SERIES MODELS Tanglewood, I have all tried .. and I took the most CHRE, (everything is relative ...), which ignores the balance over my ears, and more electro-acoustic for 580 euros ...
Frankly, since I can no longer afford to over 1000 euros in a guitar, I found t. .. the one I expected more ... Ms. OCCAZ better than many vintages in the ... and prices ..!
In the same store I tried including a Takamine Tan 10 ... flat and almost without his Tanglewood compare this ...
So I do not know if it because it is a new brand that such quality is the appointment may be to get to know, (thanks opinions like mine in AF .. .), and do not take on a hard fall or the quality they once best known for making more money ..? We'll see ..!
But for now, is worth of it INTERESTED, and I can say that I feel like a "little Taylor" in the hands three times cheaper ... just ..!
Did you find this review helpful?yesno
»