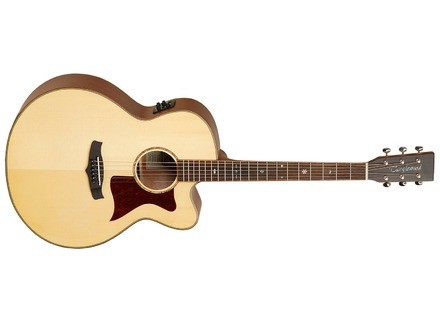 Tanglewood TW155 ST
5
(Originally written by Gaspard Blate/translated from Audiofanzine FR)
Made in China, designed in the UK.

Standard jumbo size although it's described as "super" jumbo.

Considering the incredibly low price, I give it 10 out of 10.

Extremely pleasant neck (not too slim nor too thick) that will meet everyone's taste. The handling is very easy because of the very low action.

The cutaway provides an easy access to the upper frets but that's not the purpose of this kind of guitar...

It's true that the jumbo body is bulky compared to a dreadnought. Maybe small people feel uncomfortable when they play it sitting, but considering that the body is not much deeper than a dreadnought, you won't have a problem playing it standing. The guitar is lighter than a Takamine EG 523 and a bit heavier than a Seagull S6... In short, it's a quite regular jumbo model!

Unplugged, the guitar provides a real jumbo sound: wide and deep with a thick sustain and a powerful projection. It's impressive! Once you plugged it into your amp it becomes more difficult to get a well-balanced sound.

As a summary, the acoustic sound is great but the plugged sound is a bit disappointing...

I give it 8/10 since I expected a better performance of a B-Band preamp...

The frequency response has strong lows and a very big sustain fulfilling my expectations.

I play it unplugged 99% percent of the time to accompany vocals.

I find the unplugged sound fully satisfying for rhythm or fingerpicking parts... It's not the same thing when it's plugged to an amp or P.A. system.

It's a 2007 model and I bought it secondhand one month ago. It has a stronger sustain than the current model, which I tested previously at a shop. It has also more low-end...

The value for money is simply amazing.

The weakest point is the preamp but I don't use it that often!

Based on my experience, I'm sure I would buy it again. It's a very good guitar sold for a very nice price.
Did you find this review helpful?yesno
»

You'll find all technical specs on the Tanglewood website: http://www.tanglewoodguitars.co.uk/products/default.asp?cID=26463189&sID=26465122

Extremely comfortable neck.
The Cutaway allows an easy access to the upper frets (but who wants to play those notes anyway?)
Very ergonomic in spite of the jumbo size
It sounds good right away.

Wide and well-balanced tone. Perfect for rhythm guitar.
The BBand system faithfully reproduces the tone of the guitar.

I've been using it for 3 months. It perfectly fits my purpose: own compositions in my home studio.
What I like the most are its looks, the conception, the finish.
What I like least is that it doesn't include a gig bag nor a strap pin...
Exceptional value for money!

I wouldn't hesitate to buy it again. Since the model has changed over the years, I would appreciate reviews about previous versions.
Did you find this review helpful?yesno
»

Gaspard Blate's review (This content has been automatically translated from French)

Tanglewood TW155 ST
5
Made in china on British design.
Table pica solid mahogany back and wicker covers (rolled)
Saddle sleeve and button in one pice
Keys taken from abalone
Grover Mcaniques
Prampli with B-Band Tuner Intgr (including a knob for treble, mids, bass and presence and the volume well Obviously)
Format (although named "super" jumbo) is that of a jumbo all completely normal

The handle is extremely enjoyable - not too ridiculously late, either standard - should be anyone. The action as more low-rev, it facilitates the integration of hand.
Access in acute is facilitated due to the cutaway intrt but still quite limited on this type of guitar ...
The shape of the guitar (jumbo) Obviously is "cumbersome" over a dreadnought, small sitting gn templates can be so many curves, but since the box is not much deeper than that a dread standing with a strap it poses no problem. More lgre a Takamine EG 523, a little heavier than a Seagull S6, the SAR ct short of ergonomics From the time we know has to do with A model Jumbo!
Unplugged, it was the sound of which can be a real esprer Jumbo (full, rich bass, a huge sustain and a nice sound projection), it's amazing! However, once a branch of amplifier becomes more difficult to get a good balance.
In short acoustic is really good but once trs branch is a bit dcevant ...

Rich bass sound with a big trs sustain that suited what we expect from a Jumbo.
99% of the time I use it unplugged, to accompany singing.
Whether or rhythmic finger picking, I will have done everything unplugged ... plugs into an amp or directly into a PA system is even less convincing when

This is a MODEL of 2007 bought used a month ago, the sustain seems suprieur to the same nine that I had tried MODEL Prior in-store, more bass also ...
The + is the ratio qualitprix stupfiant completely.
The - if I would prampli frquemment used it, but it is not!
With the exprience I would do without a doubt the same choice is a good guitar prices drisoire trs.