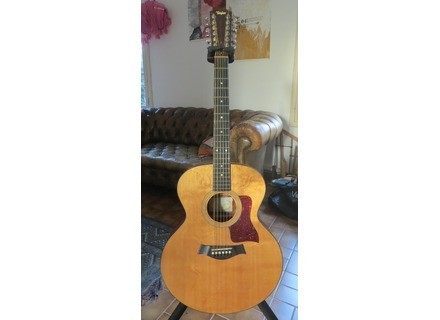 Taylor 355
5
I had owned several cheaper 12-strings over the years and I was looking for one that I would never need to replace. The prices varied greatly and that turned out to be to my advantage as a local dealer here in Cary, NC, called Fat Sound was willing to match the price of $995 I had found on an internet site.

The action is much lower than I expected for a 12-string, especially on the first five frets. There's very few songs I won't try that I used to think of as songs only for a six-string acoustic.


Well, it's a 12-string. You won't be doing much finger-picking on it. And sometimes I wonder if I should have sprung for the cutaway model -- although I don't spend much time above the 12th fret anyway.

It's a Taylor. They aren't cheap and you get what you pay for. As one of the lower-priced 12-string models, it doesn't come with a lot of fancy inlays or anything -- but it sounds great.

If you're in the 12-string market, it would be hard to do much better for the money. There are plenty of good 12-strings out there, but I never wonder if I got a good one with this particular model.