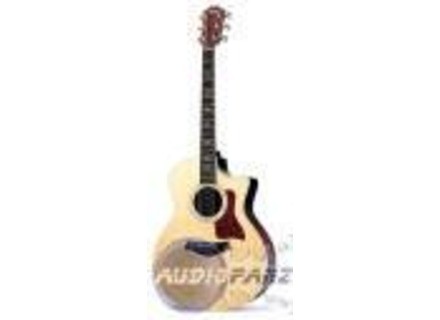 Taylor 814ce Deluxe
This guitar was made in America. It's a rosewood guitar with a spruce top, a mahogany neck and an ebony fretboard. It has 20 frets, and features the awesome Taylor Expression Pickup system. It has a regular ebony bridge. There are three knobs, for volume, bass, and treble.

The high frets are pretty easy to reach; I have no problem skipping from lower frets and hitting the notes with ease. The guitar sounds great right off the bat, but even if plugged in it's got enough control that you can get a good sound within a minute or two. The guitar isn't too big or awkward, and it's not so heavy that you can't carry it. Everything is stable, the guitar stays in tune really well unless you manage to move the knobs.

I use this amp mostly through a PA, but when I do amp it, my Crate sounds the best. I really like some of the brighter sounds that are possible one this guitar. With the volume, bass, and treble control, there's a whole lot of room to experiment with tone. I tend to go for the one that makes it sounds most like it does acoustically. It can sound good with some natural gain on it, which I like doing. It gets a very rock-oriented sound out of it that way, and acoustic blues tends to sound great with it when it's amped. It suits everything I play, which goes from Jazz to Blues and predominantly rock.

I can't think of much that I don't like about this guitar! I love the way it sounds acoustically, the Taylor Expression System is the best acoustic-electric pickup operation that I've ever heard. The sound is great when it goes direct or when amplified. I tried several other acoustics, mostly other Taylors and Martins, and I chose this one over all of them. I still stand by that decision. It's really expensive, so try and get one used or clearance, like I did. It has a pretty big scratch in it, but I really don't care at all about that, it's all about the sound. For that, it's totally worth the price. Highly recommended.
Did you find this review helpful?yesno
»

netges's review (This content has been automatically translated from French)

Extrment cozy comfort of the game is perfect and the perfect pan shot student.
There is nothing wrong is a guitar of exceptional criticize how this guitar?

The sound is sublime and powerful excellent sustain and I wonder how they did it to make it sound like it has even forgotten that it is pan time!!

I have used for 2 weeks (familliale loan) is Gante

The only snag is the price all the qualities of this guitar do not justify a price as a! Gibson and Martin are both less CHRE!
Did you find this review helpful?yesno
»

naturel's review (This content has been automatically translated from French)

In Taylor, the sries "14" I think the most enjoyable. In versions cuteway, Access in dernires impcable freight is, the hand is never ESG. The 814 is very easy to play and encourages the Fast Fashion.

Its haunting and incredible sustain.

I used a Taylor 510 for two years and since 2002 814CE. Even if I have other guitar and I tried other models of Taylor and other brands (Martin, Gibson, Guild) I'm not prt me Spar the 814CE. Or may be the same as for brazilian SERIES limit or may even be for the latest issue (mine dates back to 2002) to take advantage of the new electronic Taylor.

lenainquitue's review (This content has been automatically translated from French)

The neck is a joy, what ease of playing is impressive. The shape of the series "14" provides access to acute pleasant, and the whole is a pleasure and comfort.

In acoustics it tears, it's a fact. It has a sustain terrible, and it can meet in a register large enough even if the blues a little greasy and heavy will not ring on this skyscraper. On a pop / rock, it provides really, same as folk song etc..

I started by Takamine, and K. Yari, etc.. I almost take up a Takamine blessed day when I tried this Taylor.

What excitement! Feel the table vibrating on itself, each note is respected and is typically the most I expected. If necessary, I reselect the same yes, without hesitation.
Did you find this review helpful?yesno
»
Read the 6 user reviews on the Taylor 814ce Deluxe »