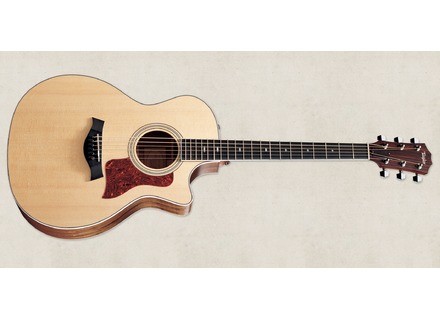 414ce, Acoustic-electric Folk/Western guitar from Taylor in the 400 series.

At one store, the Martins I tried were hard to tune. At another store, they were all perfect intonation. I concluded the first store had the Martins out on display for a long time and they probably had been too dry.

The Gibsons just didn't cut it. I was in the market to replace a vintage J series Mahogany Gibson that had finally separated along the neck and body joint. NO support from Gibson of any type.

I added an Ovation to my collection along the way and absolutely love it's perfect intonation. It's my work horse. Outside and in, it can take it. However, I missed the lows and mids of the Mahogany Gibson.

I came across the Taylor line thanks to a friend. At first, I fell for the 514 with the Cedar top. Smooth mids and lows but ultimately too flat even with new strings. Great looker though.

I found the 314 a bit too brite in the mids and highs. Ultimately, I ended up switching between the 414 and the 814. For ~$600 more, I could get into the nice rosewood look. The 814 had slightly better smoothness in the lows and mids but it required a good ear to hear the difference. Then I noticed the 814 had a flat top and back. I then noticed the sharpness of the frets as I ran up and down the neck. The guitar had dried out in the store, even in a humidifed room! I picked up a beautiful 610, and found the same thing! I left depressed.

A week or two later, I returned to the store and they had just received a 414 ce straight from Taylor. I was still in the case. Mine were the second hands to touch it after the clerk at the store set it up. After playing it a bit, confirming the perfect intonation, balanced bass and mids, I took it home comfortable knowing that it hadn't had a chance to dry out hanging around the store.

I picked up a digital humidity meter and a humidifier and added them both to the case immediately. I've been keeping the guitar at around 47% humidity which are the same conditions at the Taylor factory. As your retailer to let you read the information that comes along with the Taylor guitars discussing dry and wet guitars. It will help you pick out the jewel.

The 414 CE seemed to be the best value based upon price, balanced bass, mids and highs and perfect intonation. It was also brand new and just 2 days at the retailer. Tremendous action. Good for finger picking and strumming. The expression system is great on any of the Taylors.

I also like the neck spacing at the nut. The Ovation has a narrower neck that is easy to play, but notes have to be hit perfectly if you have big fingers. The Taylor neck is wide enough to minimize this but it makes it hard to jump back and forth from the Ovation to the Taylor.

Taylor could have added a gloss finish to the sides and back though ultimately, I may end up liking the semigloss better as it doesn't show the wear as much.

The wider neck is great, but one downside is that it is harder to thumb notes up and down the E string.

I've been over the 414CE from top to bottom and front to back. Everything fits perfectly. An expensive guitar but really well built. I won't go in to all of the construction details as you can get this off of the Taylor website. The construction on all of the Taylors and Martins were top notch. I found the biggest quality problem being the result of how the guitars were stored at the store. Most seemed too dry.

It is very hard to go wrong with the 414. The Ovangkol sides and backs were as highly figured as the top of the line Taylor rosewoods with only a slight difference in tone. Of course the 414 doesn't have the beautiful inlays and bindings. Had the 814 been in better condition, I may have picked it up, but I am very pleased with the 414. Be sure to check the condition of ANY guitar you chose before you bring it home. This must be really tough for the retailers because they want to display the guitars, but the guitars don't like it.

Taylor 414ce
5
I bought the 414ce guitar from Sounds Great Music, near Manchester England. I'm left handed and had gone there to look at an old, second-hand Antoria guitar to knock around on (priced at £199.00 by the way). Anyway I went into the high-end guitar room and there was this left-handed, Taylor 414ce. I'd never had my hands on a quality accoustic before as nobody seems to ever stock them. This was a big mistake! I fell in love with the sound, the feel and the sheer quality. I had to ask the price and it was £1389.00 ... gulp! I left the shop without the guitar and continued looking around other shops. Nothing came close and a week later I went back to the shop and bought the Taylor. (After all it was only a mortgage more than the Antoria I'd originally planned on).

As stated above, the guitar was and is, the best accoustic I've ever played. It just sings. I have copy of one of the Taylor CD's and it sounds just the same as those guitars on the CD. It's an absolute pleasure to play, it's easy, tuneful and the tone is outstanding. My old accoustic sounds dead besides the Taylor. Sounds Great Music put a warning in their ad's which goes something like "Don't pick up a Taylor guitar unless you want to buy one .. because you will". I know what they mean. To jump from a price point of £199.00 going into the shop, to buying a guitar at nearly £1400.00 gives you some idea of the pulling power of a Taylor. And I don't care, it's worth every penny and more importantly, it's a guitar for life I feel.

I have to say I don't like the look of the "New Technology" joint at the Head-stock. Having said that it is perfectly matched and is just a minor niggle really. Other than that, I can find nothing else to dislike.

This is the first really good guitar that I have owned (I'm only a guitar hobyist not a performer). Being left handed limits choice and often there is premium to pay on top of the standard price. This was not the case with the Taylor. It's possible that had I had the opportunity to pick up a quality left handed one earlier I may have bought it. (a message there retailers!) As it is I am over the moon with my purchase. It's a great instrument to own and have the pleasure of playing.

Thanks Taylor and thanks to Sounds Great Music for having the guts to stock lefties.

Taylor 414ce
5
Taylor guitars has been one of the best sounding acoustic guitar manufacturers in the industry. Many of their guitars range with different wood types and combinations but they still carry that same distinct Taylor tone. This is the Taylor 414 CE model that is one of the lower entry points for the Taylor model guitars. Although it is an entry point for this manufacturer is still a pretty expensive instrument in general.

This guitar features the Fischman pickup system which is a fairly good pickup system for running into a sound system or a recording session. He doesn't have a whole lot of features other than it is a standard Taylor style acoustic guitar.

I've played basically every single Taylor in existence and I have to say for the money it doesn't get any better than this model. This is a guitar that at the price point it gives you all the features intoned that you need to sound fantastic acoustic guitar. You can play this acoustically or through the pickup system running into a DI box for life settings as well and each setting sounds fantastic. This is the best Taylor for the money in my opinion.

At new you can find guitars for right at about $1900. That's a pretty good price for this guitar and you can certainly them into you lowering the price in many instances. I actually bought mine for right around $1300 or $1400 new about 10 years ago so you can wiggle the price down a little bit. This is a great guitar and I love the sound and look and for the money of a Taylor this is the best.

Taylor 414ce
2
I do not come back on the characteristics that have dj t cit but dwell on the realization.

Wood slectionns are good quality and the mcaniques prcises and stable. Cepandant Specifications manufacturing parat me strange. First observation: the guitar is heavy, which is for my rdibitoire hand on a massive quality acoustics. Either the wood are not dry enough or the thickness setting of the wooden box is insufficient, or internal dam is standard. Obviously there is a bit of everything ...
SECOND observation: the finish is far from being exemplary. Certainly the satin varnish of the body is pleasant and well applied but the rest left to be desired. Cash nets jointent not all correctly and those of the button, the hoop is very average and saddles are ... Plastic !!! The handle is not rgl and very poorly prepares guitar (adjustment of saddles, finishing frets ...)

The handle is comfortable with a flat profile and a width at nut average. I find cepandant wear the sleeves to the profile c or v the radius pronounced fawn Martin more enjoyable and less tiring. But this is very subjective (pratiqus styles, hand size ...).
The cutaway -trs nice indeed and gives the mouth the guitare- access to the high notes is very good.
The Gnrale ergonomics is particulire binds to the weight of the guitar, it's pretty unpleasant.

The guitar is archi-rigid: the wooden box is very thick, internal dam is a real structure and it is likely that the drying was not performed correctly t. Consquent by the soundboard is a big board that offers no flexibility. The sound is balanced but unbearable aggressiveness. The varnish adds more to the rear got clean plastic polyester. This is equivalent of Takamine midrange.
The expression system is particularly ...! An imbalance between the standard filetes strings and those that are not (irrcuprable with qualiser), a patch near a micro rosette 30 euros. The Takamine did much better!

A guitar that's definitely not worth the price, all levels.
We are very very far, from the Enlightenment years, Taylor of 80 and 90 years, is the label that you pay here, not the product.
Taylor is trying to destroy everything that made its prestige, rolls of electro acoustic.
Martin, Adamas, Collings Santz Cruz, Lakewood and our luthiers are very very much better prices.
Did you find this review helpful?yesno
»
Read the 11 user reviews on the Taylor 414ce »

Taylor 414ce manuals and other files