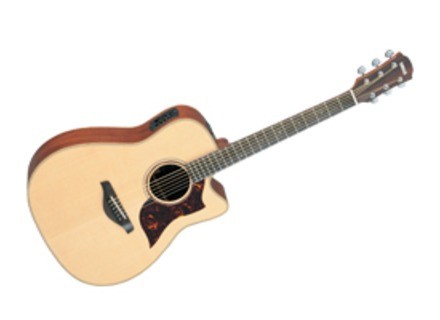 A3M, Acoustic-electric Folk/Western guitar from Yamaha in the A series.

View all offers for Yamaha A3M »

Manuduff's review (This content has been automatically translated from French)" Japanese Chinese?"

Yamaha A3M
Hi, I will speak today of the Yamaha A3M, latest addition to the range of electro with yam '.

After the failure of APX and CPX series are gear scenes, yamaha has set out to create a more conventional series of instruments and sounds like a guitar ... The A Series are born.

I have the A3M model (for Acoustic 3 mahogany).
The instrument is made in China, EXCEPT the préamplit that comes straight from Yam 'japan, it is built like most acoustic guitar with solid mahogany back, sides, and neck. The table is also massive sitka, more key is ebony. It is far from the usual Chinese production, the finish is exemplary, well assembled, it seems robust and provided the case is still class (case yam 'are always a terrible class).

The guitar has a fairly deep body, the handle is bigger than APX handle this is very close to a Guild or Martin with a satin touch for the back of the neck, which brings over ebony comfort enough exeptionnel Thurs

The preamp used is a house creation, it has its own tuner, but there was strong or yamaha is del'équipé two types of microphones, a piezo under the bridge and a magnetic pickup in the soundhole, the preamp, lets you mix the two, or cut a single, just see to mitigate them.

Lets play the guitar alone, touch is nice, but paradoxically, the handle although it tends to be forgotten in the hand, it still feels the buche hand in hand but the feeling is not unpleasant.

The guitar is light, well balanced, only access to acute on this model is limited but not feasible (AC3 models AC1 are forms auditorium therefore thinner).
We quickly took the hand and even electro, I'm surprised to find my sound after 10 minutes

At the sound I'm still surprised by this guitar, we know all the side hyper crystalline yamaha, bha on this guitar is really in a spirit martin, the sound is fat, maybe a little too much, it will choose its strings before forming an opinion of the instrument, I personally rises Elixir custom light phosphor bronze, it balances the sound of the instrument, however before I rode in Martin SP light, and I had almost the resell it sounded so fat

Now I use a little less because I offered to my father, he is very happy, and it makes the pair with the SG1000.
When purchasing I had compared to a Korean martin, a guild d150 and Fursh Silueton 62 custom shop, it was she who had won the fursh for a reason price (since it is also mine. ..)

This is a guitar with great value for money, you can do anything with, but if I can EMMETRE an opinion, I can only advise you to choose the A1M, A3M, A1R or A3R, Concerto models (ACR or ACM ) sounds like apx, however the preamp is just insane.

With the experience I can'll be took the guild that sounded a little more crystalline butthe preamp was too limited Inthe settings.

alechat's review (This content has been automatically translated from French)

Yamaha A3M
5
China Production Yamaha ... but it is time to review and revise the idea that one has guitars made in China ..
Some purists will always criticize because it is true that it poses real ethical and social issues but how ... ???
Like it or not, the work is very neat with a quality violin ..

Handle very nice and perfect ergonomics.
SRT preamp takes a little time to fully exploit but evidence to the contrary, in this range, there is nothing better ..
I tried almost everything: Bband, Takamine Fishman, etc. .. Unless you own a pair of high-end microphones, I do not see how to do better?

I have different guitars, electric and electro-acoustic acoustiquss, including my old Takamine EN 20, which ages beautifully acoustic preamp but is obsolete ...
It must be admitted, with the Yamaha A3M, acoustic is already very, electro, it's downright stunning and almost pro.
Out of the question to the promotion of a model, trademark or other. The goal is to help each other to find instruments with the best quality / price possible ... For example, Yamaha, I had a CX and I felt that it was a shovel, ditto for the APX I also tried ...
I started this review with nylon NCX series, "excellent" ...
We must recognize that their series A, at least for my A3M is a really good guitar, a great success ....

If you are fortunate, a Martin, Gibson, Taylor, Larrivee, Maton, Guild and others I forget .. may be higher, of course ..
But whether you're pro or beginner, rich or poor, I think this guitar is excellent and will make you happy .. musical This really is a great guitar ..

Yamaha A3M manuals and other files