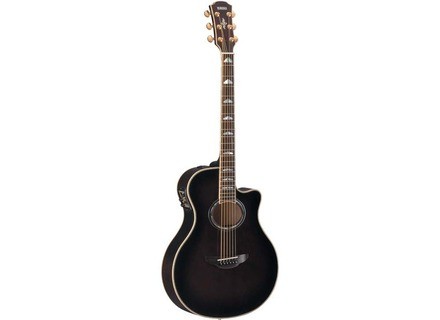 APX900, Acoustic-electric Folk/Western guitar from Yamaha in the APX series.

Yamaha APX900
4
To clarify what we do not necessarily find on the internet:
- Compact guitar (body 8-9 cm wide format mini-jumbo / "auditorium" / "concert" / etc.)
- Made in Taiwanese.
- The table is solid spruce (current)
- The back and sides are of beautiful flamed maple (rare!)
- Nato Neck (close cousin of mahogany) rather heavy!
- 3 Ply Binding around the edge of the table
- Binding a fold around the back of the neck and head
- Pearl INLAYS
- Coin plastoc black inlaid mother of pearl around the sound hole: very nice video
- Nut and bridge on unknown (not the bone anyway)
- Bridge and cache trussrod rosewood (?)
- Mechanical oil bath of very good quality

As for the button, I saw that there was a controversy between rosewood and ebony yamaha announced an ebony fingerboard at the beginning when we received some scratched with a rosewood fingerboard.

I think Yamaha has changed the terms of the key along the way because on mine, it looks furiously ebony, whether at the level of touch or visual point to further ...

In terms of electronics, the 900 is equipped with the ART system, two different types of piezo are placed on either side of the bridge, capturing two different channels on the harmonics of the high and low tables. The guitarist has at its disposal an overall gain, an "acute gain" and a "gain serious" (corresponding to the two channels mentioned above) which come to add a highly effective 3-band EQ. It has a wide range of settings.

Overall, the woods seem good quality and finish are superb, it throws! As soon as you see it, there was only one desire, the stuck under his arm, and he gently polishing the handle ...

I put my 7, which is a very good note! It lacks the mahogany instead of nato and the bone for the nut to earn more than me. Though it is better than a good nato mahogany rotten.

It is primarily for appearance "use" I have chosen. She has two points (very) strong:

- The body: the auditorium is really excellent format to play standing or sprawled on the sofa. it takes no more space than the power to play.

- Handle: really strong point. The radius is very large (almost flat), the handle is very stiff, hard button, the action is very low but yet nothing frieze. To clarify, I find the handle easier to play than my Start U.S., which stands as a reference, however, of the kind! The handle of this folk is probably among the very best for this type of scraper.

We spend hours playing it without realizing it. The format has another big advantage: the volume load is lower than a conventional jumbo, so it is pleased that Ms. I can play on the couch &#39;without too much bother.

Ergonomics standard is excellent, so I put 9.

I bought it on a favorite, a thunderbolt in a music store (I did not necessarily want to buy a scratch on entering the store)

A vacuum, for sure, requires format was not the wealth and breadth of a jumbo or dreadnought classic. Yet I find the sound excellent even say very typical. I would define their sound as "modern", ie the treble and bass are present, the high mids a little behind. It is quite unusual in a folk, it&#39;s a shame because I like the sound, it&#39;s less old-fashioned, less "Bob Dylan!"

The vacuum left her seem a little chorus and a light natural vibrato, it is very pleasing to the ear.

It responds very well to the attack, pick, picking, slap to the Knopfler, everything passes and issued new sounds.

Connected, the ART system described above can sculpt the sound exactly up to what is desired, a really very, very good surprise.

I spent some hours in the store, tested dozens of guitars of all ranges, the vacuum level, it stands out well (it does not sound "like the others *, we must love), but once connected, the ballast among the best, I put 7 because I can not put 6.5 (6/correct vacuum 7/Bon connected)

I have recently. I have tested dozens of guitars (Cort, Lag, Seagull, Takamine, Guild, etc.). And I totally flashed on it.

What made me crack is mainly ergonomics (especially neck and body) and finishes very good. Look awesome, very original (fed up with "blondes"), it "inspires".

Its level, the vacuum has its character, different from the more traditional guitars, one must love. Connected, it makes it sound like you want thanks to ART, which gives a max settings.

This guitar exudes quality, and ergonomics that it will stick to your body as surely as his rock mold. To test absolutely, you will see that in the midst of such heavyweights (Martin et al) it stands up very well, it leaves no one indifferent.

I would put 8 in total, the price / quality ratio is pretty good. Be careful, however, the key, it is possible that some models are rosewood and other ebony, which plays in my opinion on the quality / price ratio.