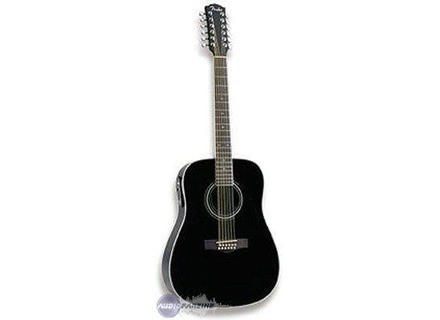 DG-16E-12, Acoustic-electric resonator guitar from Fender in the DG series.

Fender DG-16E-12
4
The Fender DG16E-12 is an affordable 12 string acoustic/electric guitar. I believe that this is guitar was made in Mexico, although it is discontinued and is no longer being made. It has a Fender Piezo pick up in it, which is pretty cool that it has a pick up at all at this price. The guitar doesn't feel like it is made out of the best materials, but I don't know exactly what it's made out of.

Playing the Fender DG16E-12 is overall a pretty easy thing to do. It doesn't have the most fluid playing neck that I've encountered as far as 12 strings go, but it is certainly more than playable. The pick up has a three band EQ and a volume knob to work with, which is also more than enough to work with. I definitely like the sound of it acoustically more than when plugged in, but it's still nice to be able to plug it in when you want to.

For the most part I've played the Fender DG16E-12 acoustically and not plugged in. The overall sound of the guitar is pretty bright, which I guess I don't mind too much for a 12 string guitar, but it would be nice to have a bit more body sound in it. When you plug the guitar in, you get even more of a bright sound than you did if you just played it acoustic. Again, I can't really complain too much about the sound of it plugged in, as to me that's really just a bonus. I would imagine that most players will be using this acoustically more than anything, but I've been wrong before...

Considering the price and that this is an acoustic/electric 12 string, the Fender DG16E-12 is definitely a good deal. It has a good enough sound and feel to get you by, but I don't know how much recording I'd recommend doing with this guitar, although it certainly won't sound awful. If I were adding a 12 string to my collection, I'd personally go with something with no pick up at all since I know I won't be using it too often, but if you're looking for a 12 string acoustic/electric at a very affordable price, the Fender DG16E-12 is about as good as you'll find one.
Did you find this review helpful?yesno
»

bibiStardust's review (This content has been automatically translated from French)

- How many frets, what kind of micro as well as their configuration?
20 cargo micro Fender H-330, volume + bass, mid, treble.

- Ergonomics is it good (in terms of shape, weight ...)?
Yes, but does have better ergonomics with a case of rsonnance "breaks" to Access in a treble.

- Gets it easy to sound good? ...
DEFINITIONS strong point of this guitar: the sound is exeptional!

- Appropriate are your style of music?
Yes, I jous beacoup of Bowie (Space Oddity, Ziggy Stardust ...) and often I approach the "Bowie"

- How long have you use it?
4 years can be even more now.

- What is the particular feature you like best and least?
I love the natural spring cho acoustic (12 string of particularity).
I do not see less ...

- Have you tried many other models before acqurir?
No, not at this moment ... I tried a few Takamine 12 strings that are two or three times Chres, for her, of course nickel, but the Fender is not envy!

- With the exprience, you do again this choice? ...
Yes, yes, yes 100 times!
Did you find this review helpful?yesno
»