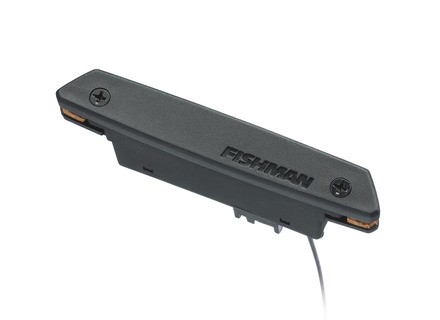 Jeffouille's review (This content has been automatically translated from French)" It&#39;s all good!"

Fishman Rare Earth Humbucking
4
This mic is excellent: it is very balanced between all the strings, it is not very powerful but enough to attack a table or DI, it has a real acoustic sound (even if it is not the equivalent of a condenser microphone placed in front should not dream), has a very high resistance to feedback and remains relatively quiet in the soundhole.
In short: it is built for the stage and plugged into a good preamp he gives results of very high charges (I tested it live in front of 250 people across a Para Acoustic DI by LR Baggs and I was becoming popularized as to my sound by musicians and technicians).
I preferred to Takamine Tri-Ax I had ... twice! The Tri-Ax is the LR BAGGS M1 active but with marked above Takamine (licensed construction). L 've found the M1 in fingerpicking but not bad really too aggressive Strumming (in particular acute) and much more sensitive to feedback and other "harmonic" not very pleasant, at least at high volume.
Warning: this is not a microphone that will give you the results "as a true" recording: here the result is rather flat and does not sound like a microphone in front. It is made for the stage and the result for this use is there and there.
I have not tried to Rare Earth Blend: too expensive! I took this one right away, I'm not going to change! The sound is really well balanced between each string, but also in the frequencies: the bass is just round it right and the treble just as sweet as it should. It does not sound too much power, even treble the amount in the boxes (which is mostly the case with rosettes).
I paid € 178 to GuitarCenter in Lyon. It is at 166 € + 10 € Thomann on postage that makes 176 ... So much to say that 178 is a good price!
I skim a lot of microphones existing rosettes. Not only because I'm not a fan of the piezo but also because the concept of "I can take it off when I want" I like it. I had a Dean Markley including Pro Mag, a Tahoe, I tried the Seymour Duncan passive, I had twice the Takamine Tri-Ax as I said. My opinion is I think relatively forged. But again: we must try and ask what application you want to do! To live in the group in any case: no problem!