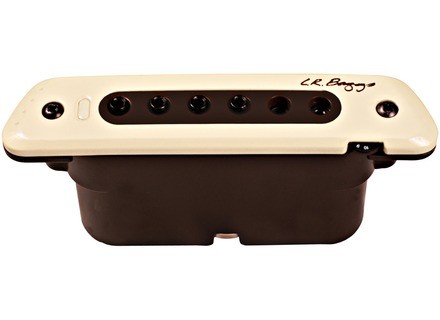 L.R. Baggs M80
5
I just receive it, I have not yet done so to test live just on my monitor speakers via the para acoustic DI in the same house.
I Tri Ax (which is another active stamped Takamine M1) that I liked a lot, despite its flaws: too much midrange and treble forward power too (the default main microphones rosettes).
The M80 has exactly the same shell as the M1, with small volume knob and 6-pin adjustable. A small additional button has been added to check the drumkit status (cool!)
The concept is the same: the two coils on each other with the bottom one is "suspended" to capture the vibrations of the table and the box. LR Baggs shows have improved by 40% uptake of the box.
The installation was more than fast since I had to remove my Tri Ax to put the M80 in place (this is the same jack).
For sound: downright fantastic! Mediums annoying that needed to be addressed in all directions with the equalizer disappeared, giving way to the same low generous previous model and have incredible highs almost lost their side "electric". The sound is of course perfectly balanced between the strings.
Few small pats on the table guitar and we see that the microphone really deepened in the "capture" of the body and the vibration of the table (I therefore confirm the "40%" identified by LR BAGGS) , without achieving the result of a microphone placed inside. Was in all cases due to this the true side "acoustic" which lacks the classic rosette microphones.
In conclusion, I think you have found in this micro everything I sought for some time. It has everything I like about the M1 with its outright best for my taste (less mids and highs much less "power"). It is perfect strumming, it's downright superb fingerpicking.
Warning: This is a microphone for live not to replace a microphone in front of the guitar recording situation! I read about the test that AF was not great recording: who cares this is not his field!
In any case, to be an avid fan of micro rosette and have tried a lot of things in this area (or almost), I consider for the moment as the ultimate micro rose, because of its compromise between sound, ease of installation (compared with a example Magmic where to install the drumkit in the guitar) and use (Fishman Rare Earth blend very well but requires to position the internal microphone to avoid many micro phonies) .
Brief happiness! Happiness still expensive (too expensive) Europe (333 € on Thomann!). Fortunately, a cousin brought me to New York for $ 270 (210 €). At that price it's worth the shot altogether!