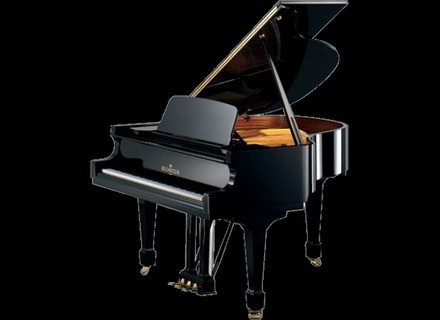 muscoll's review (This content has been automatically translated from French)

3 ½ years APRS delivery, my Bechstein A 190 has a right fitness a bit more muscle.
Markers were tasss and I have a little trouble playing pianissimo.
There is a diffrence stamp too clear when I use the una corda pedals.
A little less precision in touch.
Some notes have a stamp mtallique (they "zinguent").

We begin with an agreement prcis but APRS have the rgl touffoirs.
The precision of mcanique found.

We touch the alignment of the hammer on the strings: it does "ZINC" more.

It harmonizes, and we can repeat the pianissimi.
In short, I found a new piano: 4 hours of work when same.

It remains the rgler rptition: it will in a few months, with an agreement and a Checker harmonization.

Reminder Notice of previous ones:

Since my opinion of March 2007, he runs a year.
The Bechstein A 190, g now 20 months has just been Harmonis just APRS agreement prcis trs.
The technician also verifies systmatiquement unison before diving Whereas the hammer.
The instrument always gives me satisfaction and Entire trs is much agreement.
However, little by little, I noticed a drop in precision grades: more difficult to make pp.
A tendency to play too hard, and a lack of homognit.
Had I become more demanding, or they felt a little s'taient tasss? Certainly a bit of both.
O In this alignment which helped put things in place. Better, I n'hsite more play now, semi-open cover. The highs are trs perls, allowing many shades.
The bass is Fidler themselves: deep, powerful, free excs.
Not much to say on the mcanique always prcise. I still try ds pianos that I have the opportunity. Besides - in order - the Bechstein B 210, 205 Steingraeber, the Bsendorfer 214, and the Steinway B 211, no one invites me to change.

I picked this instrument - among others - the ct brilliant, but not "flashy".
It can, also, its subtle apprcier.
If c'tait again, I will choose the new Bechstein A 190.

I use for 8 months, a 1 / 2 tail Bechstein A 190, which replaced a Gaveau of the same length.
This instrument is brand new and Staying in only three months in the store, enough for its rglages and agreements, not too much so he does not t "gambling by everyone. ..

In dpart I did not think this brand because it was too CHRE for me (MP 192, B 208).
But I had to try this MODEL, made in Germany - and not elsewhere, unlike what we read here or sometimes - with good quality matrial of trs.
What attracted me the most is its brilliant sound but never aggressive, and its versatility, rightly points out some sellers.
At first I thought a Grotrian-Steinweg, but it's a piano plutt exclusively for romantic music.

A low of 190 are rich and deep, medium / treble very clear, the balance is excellent, the reserve of power for this size is thundering.
The mcanique perfectly on my MODEL RULES, gives Entire satisfaction every time I play piano on another, I feel terribly limited so great is the diffrence in the possibility s!
Finally, the agreement remains stable trs (the pice is Tempra, both in terms temprature hygromtrie the point of view).

The only weakness may be RSID, comparing a Steinway B 211, treble least perls, but the bass is much suprieures of Bechstein.

In addition to Japanese pianos - Kawasaki Yamaha - good quality indeed, but little INTERESTED, I tried other German instruments: Schimmel, Sauter and Seiler are below, too Grotrian typ the Petrof (Tch quie) seem to progress.

Still other brands, Bsendorfer, Steingraeber, Steinway. For this size of 1m90, I prfre the Bechstein.

A word also for the Pleyel 190 is a good instrument trs, with a sound may be a little too "flashy" (because of alignment?) And bnisterie suprieure to other.

In hindsight, I do in my spare 190 A for a Bechstein B208/210 even finer and more nuanced Steingraeber 205 or so two instruments larger and more expensive.
I do not really regret my choice.
I prcise nanmoins I tried 8 Bechstein A 190 before choosing mine.