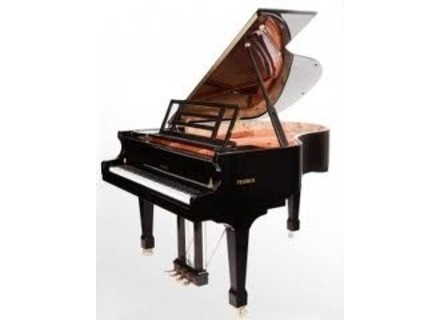 Feurich 178 Professional 2
2
Having tried the model Wendl & Lung prcdent, also manufactured Ningbo in China by the company Hailun, I wanted to know what was the evolution of the Chinese piano.
utant former was very "blustering" over German pianos and even with Yamaha or Kawasaki this Chinese Feurich seemed aussitt mivre and apathetic.

Yet I t attracted by advertising touting mrites of this instrument: it was said even a young franais pianist had believed the blindfolded, play on a Steinway ...dropoff window

The string is a little big.

Nothing in this piano can do think a Stein.
Nor depth, almost non-existent and that prevents the nuances.
Neither the stamp, so that it becomes fluffy velvety, Aseptis.
Neither the mechanics that works, certainly, but o curiously found this cotton under the fingers.

In short, one who absolutely wants to have a grand piano without setting a minimum price may turn to a Chinese model, but there are less expensive and not worse.
Did you find this review helpful?yesno
»

nopia_fr's review (This content has been automatically translated from French)" A beautiful piano ..."

Feurich 178 Professional 2
5
This is a piano this year and discovered that I had the opportunity to try and compare the store directly.

The price range of the piano corresponds to models or SAMICK G.STECK, its size it closer to the YAMAHA C2.

It has an impressive sound and sweet, a pleasing sound to our European ears (normal, the parent company is German), with a very interesting depth in the bass.

Compared to a Steinway or Bechstein other would be crazy, because these products are 6x more expensive ...

I would add that the "fourth pedal" or harmonic pedal is a real asset for lovers of classic ...

muscoll's review (This content has been automatically translated from French)" Limit false advertising ..."

Feurich 178 Professional 2
1
Having tried the previous model Wendl & Lung, manufactured, also in Ningbo China, Hailun by the company, I wanted to know what the evolution of Chinese piano.

The former was very much "blustering" over German pianos and even Yamaha or Kawai, this Feurich Chinese seemed vapid and listless soon.

Yet I had been attracted by an advertisement touting the instrument: it was even a young French pianist, had believed, blindfolded, playing on a Steinway ...

The string is a little big.

Nothing in this piano can not think of a Stein.

Nor depth, almost non-existent and preventing shades.
Neither the stamp, so velvety that it becomes fluffy, sterile.
Neither the mechanical works, certainly, but which, curiously, we find that cotton under the fingers.

In short, one who insists on having a grand piano without putting a minimum price can turn to a Chinese model, but there are less expensive and not worse.