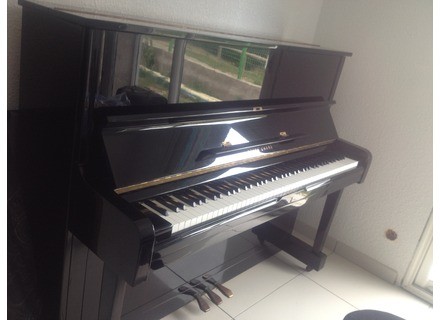 U121, Acoustic Piano from Young Chang.

Young Chang U121
4
In what musical style and context (training, recording, live, etc.)do you currently use this piano?

- I think its sound mostly suits recording pop, middle-of-the-road music and so on. As for live, I'd say it should suit as the hammer mechanism takes heavy playing very well. By the way, even with a high velocity the sound keeps the same timbre, without distorting. I'd say it's pretty versatile as far as contexts go.

Does its finishing seem well-made? Does it look sturdy? How do you judge its touching? And its pedals?

- Young Chang is a Japanes manufacturer. While it's made in a factory, it still remains well manufactured and rather well premade. It's really, really strudy. Heavy as it is, they clearly didn't refrain on the wood armature, cast iron sound board, strudy mechanism - all at a very good level. Velocity and sensibility are very precise, each key pressed is palpable. Three pedals features, the left one gets all the hammers closer by half their original distance from the strings, some people opt for changing sounds (which it does as the sounds have less transients), but I'd also say it allows to play faster for masterclasses.
The middle pedal is for braking... lol, no actually it allows to add a felt band in between the hammers and strings, which completely erases the transients and chokes most of the timbre. It works really well as a muffler.
"Set it carefully, or it chokes fast... too fast."
The right pedal releases the strings, allowing them to ring entirely. I found the sustain pedal to be surprisingly precise. Once again, you'll have to set the brackets properly and let no slack in between them. "The less slack there is, the most precise the pedal will be" (Master Yoda, be gone!) lol.

What about the sound on the entire range? And sustain?

- Regarding Sustain ? it all depends on several parameters. How heavy you hit the key, how the strings are (with more or less oxydation), for the rest I find them rather pleasant to play. Nothing too much or not enough. A nice compromise.

- Everything: its versatile sound, beautiful appearance, comfortable feeling, and more than all, it's very sturdy. What I like less (but certainly lacks importance) is the square -way too squary- shape. Looks like it takes too much place in a room such as a bedroom or WC - lol! But it doesn't even nearly influence the sound - just a problem of Japanese designers who wouldn't bother with design.

- To describe its sounds with words, I'd say it's in between the lightness and softness of a Petrof or Gaveau and the slamming sound of a Samik. It's in between!!! a sort of compromise!

I'd personally say it's neither a first price piano for a beginner, nor a high-end Masterclass at 10000 bucks.

I'd rate it over a mid-end piano. I haven't tested that, but recording with it in the studio should be effortless for a rather satisfying result.