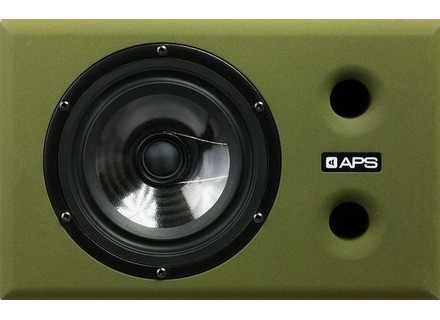 Coax active studio monitor is designed for operation in near-field, thanx to coaxial loudspeaker used in its construction - where precoated fabric dome of the tweeter intergrates with the cone of woofer to a point source - the acoustic centres position remain the same regardless of change in distance.

- high SPL makes them ideal for a wide range of music styles,

High-quality components made in Europe used for construction of Coax and well thought-out acoustic design have resulted in perfect linearity of processing, at the same time preserving natural sound timbre. Detailed music transfer and sensational stereophony make Coax comparable only to the best in the world designs for listening in the near field.

nilhartman's review (This content has been automatically translated from French)

Aps - Audio Pro Solutions COAX
5
I wanted to monitor speakers proximity assume that as such, and take advantage of their small size. Not shoeboxes who would pretend to be a speaker wall ... In short, real tools, to make my life easier as the sound design for the production and mixing.

After much research, I have come to me very interested to Coax&#39;s.

On paper, it looked like about it:
- Superb stereo image through coaxial speakers (woofer and tweeter share the same center)
- Excellent reproduction of the spectrum and transition through their closed (not vented) firms despite low at least this spectrum as other speakers (typical against-part process enclosures)
- Designed to be used in low volume / moderate and short. Of nearfields so!

Everything I was looking for, and in a much more reasonable than the PSI A17 Spiral Groove SG1 or budget. The other speakers in the same price range have not specially attracted me elsewhere (Focal, Adam ...).

In short, I wanted to hear the Coax in my studio ... and I jumped on it. They enthroned since very proudly on their stands IsoAcoustics.

9 months later: my verdict, coined by an overhaul of the entire production / mixing my LP (I thought well advanced yet until I plug the coax ...).

Level frequencies, restitution is incredibly neutral from 60Hz without unnecessary (and confusing) exaggeration of low frequencies as many other nearfields: Coax not looking to sound bigger than they are.

And this is their first big highlight: no compromise in its name an absurd race decibels and low frequency seismic also artificial.

The lack of very low frequencies is very quickly forgotten, as their accuracy in the bass and midbass is useful: my kicks and bass are still massive (they go well and you spend the morning by the way), and puff over each other.
It becomes impossible to have 60> 300Hz blur and "muddy" ... unless it is a bias. And the whole mix is ​​delighted: All "opens".

The mids and highs are just relieved the rest of the spectrum is returned in an equally precise.

Rapid return of transient is frankly baffling. Again, thank you closed the closet!

The different types of cuts are clearly audible, and it becomes a joy to use dynamic processing tools especially if like me you see the compression as a way to breathe life to the audio (not just a utility not sexy to control the volume and the peaks of a particular track ...).

Last but not least, their stereo: Magic! It is clear, beautiful (when the mix is ​​nice at least ...).

That praise, is not it?

A speaker is always a matter of compromise ... and in the case of Coax, I perfectly accommodates their weaknesses:

- Relative lack of power: again, they are not made to bring the chin or replace midfields!
- Lack of low frequencies below 55Hz, and "less bass" compared to other forums: but again, it&#39;s so accurate and useful in low / medium low that I quickly forgot my a priori about it.

I use them extensively for 9 months.

Important point: they have two / three weeks to balance and sound like they do today. To hide nothing from you, I had a fear in the early hours of listening if their accuracy was already impressive, their lack of depth was then obvious, making them aggressive or rude. But again, this is now a distant memory.

I needed time to tame, especially the defects mixes made on my previous monitors jumped in my face (it was not pretty nice).

At first I tried to touch the pieces without me address the sources ... : Mixed results. But what good do my ears to Coax.
Then I redid all my records from scratch, re-patch my synths etc ... with Coax: there, day and night (in a good way).

And since it is a joy to sound so ungrateful for more technical tasks for creation.

If a sound / mix is ​​ugly, so it sounds ugly on Coax. If it is beautiful, then it sounds beautiful. All that to say that they do not magnify the audio, but the issue accurately and honestly.

My songs sound as expected, on all systems on which I was able to play from (speakers of an old macbook to the Barefoot and other Focal SM9 through an assortment of various and varied headphones).

I love their accuracy and honesty foolproof. To my ears, they are really useful and link problems: they are real tools that help me instead of passing me the ointment.

I am more than happy with my purchase, they suit me perfectly. Coax sound like much more expensive speakers ...

And not spoil the APS customer service is top notch.


23 of 23 people found this review helpful