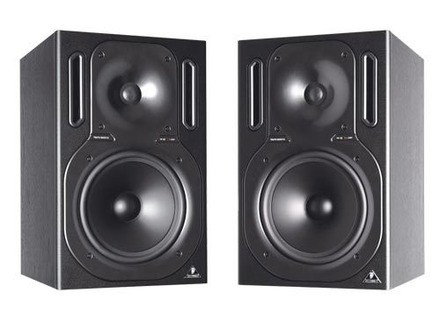 Truth B2031, Active Monitor from Behringer in the Truth series.

Behringer Truth B2031
4
The Behringer B2031a Truth Acitve Monitors give you a great sound and will make your mix better. I was actually really surprised when I first came across these monitors for the first time. Because Behringer isn’t known for their monitors but these are great. The low response on these is very accurate, many people purchase monitors that have the “boom” in them . When you mix in those monitors with that extra low end it creates a very muddy mix that you wont even think is muddy because your speakers make it sound good. The Behringer B2031A give you a great accurate low end that will make your mix sound great and sound great in other systems as well after you mix in these.

As far as the highs go, the frequencies are very natural. The sound is a very comforting sound that is very easy on the ears which allows you to mix for longer periods of time and allows you to get a better overall mix without your ears aching from the high end sounds and frequencies.

The Design of these are very clean, they will sit just perfectly in your personal home studio or home setup that you have for mixing. These are also extremely easy to use, just plug them up to your audio controller set both monitors to the same level and even if you are room isn’t treated right you can still get a great mix because for some reason the sound still comes out very clean in empty rooms.
Overall these are great,and I had zero problems with them because most monitors that aren’t expensive wont last you a very long time. I still have these and use them from time to time for some referencing and they are my go to monitors when I mix those punchy baselines.

Behringer Truth B2031
5
These studio monitors have everything I would ever expect in professional studio monitors plus more. There are no additional features that I could possibly think of to add to this product. They've thought of everything.

The manual says it all. The manual explains how, where, and at what angle you want to place your monitors, and what settings you want to use for different room sizes. It couldn't get any easier than that for studio monitors.

These are built very well, nice and sturdy. No rattling when they're producing sound at very high levels. If they fell, I'm sure I could pick them back up and they would still be working with no problems.

Without these monitors I would still be sitting in my studio going crazy while trying to mix and master music. If these monitors were a girl, I wouldn't even think twice about taking them home with me.

Originally posted on FutureProducers.com
Posted by: Unknown ( 3-, 2003)
Did you find this review helpful?yesno
»

Behringer Truth B2031
4
The features are great. Dialing down the high or the low freq. with a simple switch is great for set-up aspecialy with abnormal studio shapes.

Set-up for the novice will be easy, as the manual has full diagrams and indept explanations.

At first I did feel these were very close to the makies. After a while using these though, I found that the bass would sometimes be a little misleading and the highs would be a bit splashy. But having said that, I must say that you can compansate for this by occasionaly running your mix through another system (eg car stereo, hi-fi). Also they do tend to be fatiging.

I noticed a slight rattle in one of the woofers. Strangely though, after cranking the things until the limiters switched on, the rattle has mysteriously disapeared! Hasn't come back since either. mmmm!

I would rather the mackies! But for the money I can't find anything to compare. Get them if you are on tight budget. You will not be dissapointed.

Behringer Truth B2031
5
I use Truth B2031 for 3 years for electro productions, home studio setup (listening ear height).
These monitors are self-amplifis which quickly purchase a supplmentaire amp: one gains in place and quality of listening as it is no longer worth it to find an optimal configuration amp / monitors. The connection is of quality (choice of XLR and jack) and speakers have their own on / off button.

The frquence curve is sufficiently neutral for monitors of range. Depending on their place in the play, it is possible to correct the levels of bass / treble thanks to the knobs on the back of the speakers. This allows to adjust the curve to frquence peculiarities of his home studio.
The image is stro respects by against the size front / rear is less clear, which perhaps Gnant for musical styles in which spacialisation front / rear plays a the primary (eg minimal techno). I use a Sennheiser headset extra to control the "depth" of the sound.
The sound is alive, the bass is hot as on Mackies and treble are not aggressive. It is possible to mix low volume without losing serious.

The B2031 Truth is my first instructors worthy of the name. By moving from a hi-fi system this pair of studio speakers, I realized how important it is to had a listening of quality. As always with Behringer, the report qualitprix seduced me, these monitors are robust, have a very professional look and allow raliser a satisfactory mix for an affordable price.
My financial situation has evolved today, I probably would turn into more upscale future models. But it prevents that for 3 years, the Truth B2031 helped me raliser good job without ruining me. I would advise anyone wanting to get into the computer music Seriously ... cheaply.
Did you find this review helpful?yesno
»