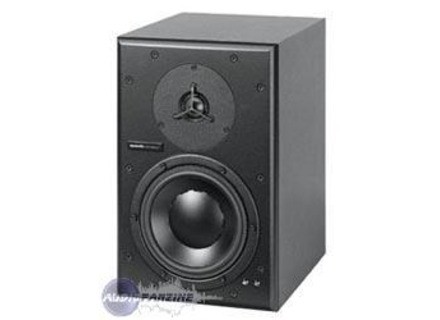 BM6A, Active Monitor from Dynaudio in the BM series.

View all offers for Dynaudio BM6A »

Everything is OK, in my opinion.
The soundcard or mixer to which they are connected are important.

These monitors are simply great. But you nevertheless need to test them and compare them to other models in the same price range to make your choice. In my case the decision was easy and I would buy them again without any problems. I also got the BM10S subwoofer to complement the low frequencies and everything is mind-blowing after adjusting them correctly.
Did you find this review helpful?yesno
»

Dynaudio BM6A
5
My choice was motivated by their size, power, reputation, plus I found them secondhand.
I use them as studio monitors. But sometimes also as PA system for vernissages at art venues, their precision is great in reverberating spaces, like churches.
No volume control.
No speaker protection.

Like everybody else, I rediscovered the mixes I had done with my MSP5! Now I mix with both and the mixes sound good on both of them and my headphones (Sennheiser HD25-1), they sound fine anywhere.
I'd say they are not enough on their own, but I do 90% of the work with them, the MSP5s I use only to give the mixes the finishing touches because they always highlight whatever sounds aggressive.

I've been using them since 2004. I don't know any other speakers, except my MSP5.
I would buy them again, but I would also like to hear some other models.
Did you find this review helpful?yesno
»

Dynaudio BM6A
4
The technical features that motivated my choice to get a pair of Dyna Audio BM6A
monitors are the size of the monitors and the sound quality. The size is the perfect size for near field monitors and perfect for near field listening. I also like that these monitors are self powered and do not require an external power amp. I use these speakers with Pro Tools and a Digi 002 rack version.

The sound quality of the Dyna Audio BM6As
is very full and clean. They represent an accurate portrayal of what is being played and it is nice to be able to get a mix that sounds good on these and that will transfer well to other sets of speakers. The stereo image is more than satisfactory as it portrays a wide sound that covers the full range of human hearing. It is crisp sounding and has a nice low end response as well as a nice sounding mid range and high end. The dynamics are accurate as well, and I would say that these monitors have an overall great sounding that is true to what you are playing through them.

I've been using the Dyna Audio BM6As for about three years. My favorite thing about them is just the overall sound quality. The price is also a big upside for these monitors, as they are very reasonably priced. I also have a pair of Yamaha NS10s and these are much fuller sounding in comparison, although they are more expensive. These have come down in price in the last few years, making them an even better choice for monitors. Mackie is known for making well made products, and these monitors are some of their best. I plan to hold on to my Dyna Audio BM6As for a while as they are great sounding monitors at a great price.
Did you find this review helpful?yesno
»

Dynaudio BM6A
My purchase was motivated by the reduced size of the speakers in relation to their performance.

The lows are extremely precise and go really deep.
The sound level can be very high without being aggressive nor distorting.
The speaker doesn't vibrate nor resonate like another model I used to have (BEHRINGER B2031), which nevertheless works fine for the price!!
The sound of the BM6A is rich and detailed. You can hear everything and the stereo image is very nice (but not exaggerated).
The dynamic response is mind-blowing and cruel to the mic preamps and recorders!!!!!

I bought them in January 2004.
I use them for music production with acoustic instruments and they tell me the truth.
I also have a pair of TANNOY System 600s and there's simply no comparison.
The BM6A are much more faithful, more transparent and less ear-fatiguing in the long run.
Long live Dynaudio!!!!
They are worth the investment.
But be careful with the placement, it's better to give them some space to breathe.
Did you find this review helpful?yesno
»
Read the 10 user reviews on the Dynaudio BM6A »