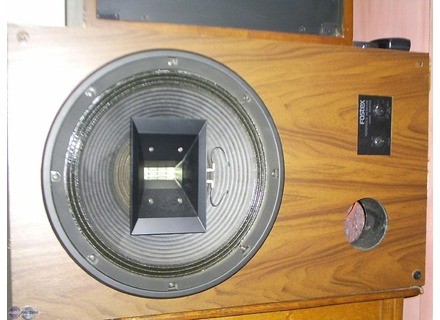 fluctus's review (This content has been automatically translated from French)

Fostex RM 1000 REFERENCE MONITOR
5
Their main strength: the coax. This makes the rivals of the big Tannoy embedded in walls of the big studios.
With my Denon PMA 100 MR (2X100W), they are under exploited, because they would require that "spit" over DB, drives by a powerful amp.
They are prvues as "large costs" (for a small cabin) or cost of medium size (for a large cabin).

Like most of coaxial speakers, it's their big intrt homogne dissemination of sound: the sweet spot is stretched trs. Is any almost like o that one is in the cabin of mix (from the balance at D / G Obviously!): So the musicians hear the same thing the technician during the mix .

The bandwidth is tight, they go down up to 40 hz and really want! Enjoyable for bass players ...
So they ncessitent few tries to find the place o: they need air (far enough from the wall).
They give an impression of neutrality and gentleness gnrale, with a balance less "physiological" (= loudness) that monitors the latest issue (Mackie..).
The fever is mild, but enough dli. They are made for a MUCH medium or hard.
With my Denon PMA 100 MR, the dynamic is a little "crushes" on the Dynaudio, which makes them less "violent" therefore more enjoyable by taking the ...

Stereo image is ample, with a sweet spot trs tense, we do not spend his time moving the head to find it (unlike Dynaudio). The image is stro prcise, but not as much as the Dynaudio (logical, given what I just write).

I have the studio for 6 months, and they perfectly fulfill their rle: Dynaudio BM5 my complter, both in bandwidth, timbre, and the level of dispersion for the musicians (I dgrossis on Dynaudio's low, then I verifies the Fostex with average musicians, then I refine the two varying levels).