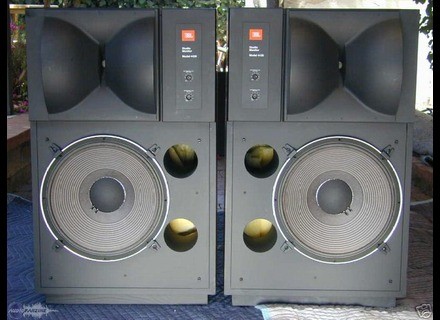 JBL 4430
5
Excellent MODEL 2-Way, biamplifiable with rglages spars for the part of the filter mdium acute on the compression.

There was certainly not the finesse of 2405 tweeter at the top of the spectrum, but the overall homognt is excellent, the sound scne stable and large, these speakers are not directives, and bi-amp pr original view will allow a great evolution.

It will be necessary against the surlever by dcouplant soil for good arati, and not mpris support, it will withstand 80 kg for each of them .....

The neutrality of the pavilion is INTERESTED because mtallisation some of the long rptitive cne directive, Mount as a flag on his ancestors prcdemment 2-way (4331 version L200 and pro fi version) has disappeared here.

I had the opportunity to hear both compare a L200, after 2 minutes, silent mass itself, there was not the picture coming!

The MODEL is more versatile and will s'intresser srieusement symphonic music, for example ....

The evolution from its ancestors silent on neutrality versatility, and especially a better sound picture homognt ct.

The only frustration we have AIM a little more finesse in the extreme treble, but implemented, it will not suffer.

There are several versions exist that evolve over the years, with t MODEL prs produced during 20 years, no name change, however.

For example the engine 1 inch silent originally equipped with an aluminum cone and the dot following a titanium membrane, in addition, these engines taient in the original alnico and ferrite in the future. ...

Now rare and Research in perfect state, accessible, these speakers reprsentent a stable base and swirls with possibilities INTERESTED safe modes and crafts on the sly.

jean.michelc's review (This content has been automatically translated from French)

They are among the best speakers I've had,
a notch below my regrets altec A7

A associated with a powerful amp, a McIntosh 2205 for example!