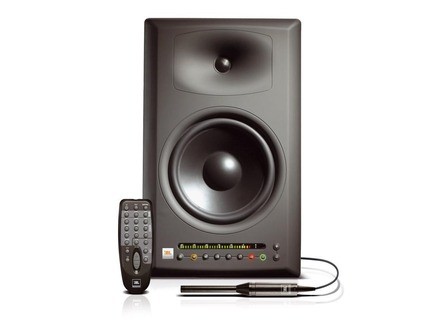 LSR4328P, Active Monitor from JBL in the LSR series.

JBL LSR4328P
4
The JBL LSR4328P is a pair of studio monitors that come with a wireless remote. I did not like the wireless remote idea at first but after I was in the studio and had a chance to work with these monitors first hand I realized that having a remote to control them was a great feature that I have never experienced before. These monitors have handles on the side of them so you can move them from one place to another easily; they also allow you to get them at the perfect position and find that “sweet spot” in the monitors that all engineers and musicians love. These monitors to me are more for mixing or mastering purposes and not for general listening or playing purposes because of the sound they put out. It is a very flat sound, but that is perfect to work with for creating your mixes or masters.

These monitors are easy to set up, they are just like any other pair of monitors that you purchase and set up. The only difference is that these have buttons on the front of them and a built in dB meter so you can see if your sound is clipping or how loud it actually is. This feature is a good feature to have but it is not something that I must have to work on a song.

The price of the LSR4328 Monitors is pretty high; it cost over 1,500 dollars for the pair and then another 200 just to have a warranty from JBL on them. We had to purchase the warranty because there is no way we would take the chance with spending that much money on monitors and they could blow a month later. So we are almost 1,800 dollars in the hole with these monitors. They have provided us with some great features and sound to work with. But I just really don’t feel like they should be worth that kind of money. Especially considering the fact that the low end sound is not as heavy or thick as I would like it to be, I have other monitors that I love using as well and they cost about half what these cost.
Did you find this review helpful?yesno
»

JBL LSR4328P
4
These monitors sound good and we have used about every monitor made by man or machine. I would say they don't remind me of the old 4430 or 4435 the most impressive monitor ever made but they do have a great sound. I think all JBL's made today accentuate the low end compression too much and can be deceiving. These are a bit colored sounding. I would look into the Mackie monitors the MRK 2 for the money. I like flat monitors and the new line of JBL seems to be a bit to compressed sounding for a better word. There is not a real bump on the low end nor on the high end but overall I find it to be very hard to tell a real representation of my mix. I have heard other JBLs with the same coloring but these are better than some of the models I tested from 2005 to 2012 when buying monitors for my smaller rooms. I like the fact they do sound like an older JBL and that is unusual for a newer set of monitors. I have heard a great deal of the JBLs. I have 4430 and 4435's mounted in our sockets in our A studio and in our B studio and both have a great flat response. I always suggest when buying monitors you have to consider the room you are listening in and the acoustics or on most all cases you will be deceived by bad acoustics especially on the bass or low end. Bass enhancement is common place on the newer manufactured monitors so be careful. I would listen to these in a store and run some music that you have mixed.

Great stereo imaging. Good clarity but a bit too punchy. When I say punchy I don't mean low end around 20 or 30hz. The effects are a bit too smooth for my liking and that is the case with any newer monitor. I have not found a solid pair that don't mess with the effects a bit. This is also on the user, some mix with a great deal of effects so any monitor along with a poor room can mess with your head. These monitors did not strike me as having any special bad misrepresentation of any effect "tails" or roll offs of any highs or lows on the effects. I found the speakers to have very good grades on the clarity. They were very clear and crisp. I think that if you are looking for speakers with an high end budget I would look into a store that would let you try them out on your credit card and take them back in exchange for another pair. Just to be on the safe side.

If I were spending the money I would buy an old pair of NS10M Yamaha's over this speaker to mix on. They are a bit colored but if you want to impress your clients this speaker will suffice and then some. They are clean and crisp and have a JBL sound as only JBL can do. I love JBL but I like JBL's that require power and are really flat from 20-20. www.chrislieckstudios.com
Did you find this review helpful?yesno
»

JBL LSR4328P
5
The JBL Pro LSR 4328p are a great set of studio monitors that are affordable enough for you to have at home and use. If you spend enough time understand them you will get great quality like your song was mixed in a top notch studio. The response on this monitors is very flat, especially the low end of it is flat and not over powering. The sound is very accurate and mostly anywhere I put the song into and listen to it, it will sound the same way it did when I was mixing it in the JBL Pro LSR 4338p’s. It did take some time for me to get to understand them, which is normal. Everyone should take some time to really get to understand their monitors and how far they can push certain sounds and frequencies without over doing it. Its basically just an overall process of understand how your monitors will sound stacked up against other systems with the same song.

The sound is great for mixing and mastering. I have even just used them to listen to music on you tube before and they still push out great quality of you tube horrible compression that they put on there songs and videos.

Overall, JBL has put out a great set of monitors that you can still purchase new in some stores and you can grab them used online from a number of different places. I have been using these off and on for about the last year or so just depending on what type of music im listening to or mixing down. Using these at home has really helped me take my music to another level. With so many different monitor options on the market today its hard to find the right one that will work. These will work for you, thanks to JBL

JBL LSR4328P
5
I found these used on craigslist for such a deal, that i had planned on selling them for a profit. After setting them up in the studio, I realized that they weren't going anywhere.

I was intruiged by the feature set, but I was most interested in the RMC (room mode correction). Having said that, I was so impressed with how they sounded in my room, that I never bothered to use it!

I also love the I/O options on the back, including USB!

I use them for both tracking / mixing/ mastering in the studio, but also for my hifi turntable, and often with my laptop. They are truly great sounding speakers. I've upgraded from Event 20/20p's, and I still have yamaha ns10's in the current rig.

The JBL's are much more detailed and defined than the NS10's. They feel like they have a flat response in my treated room, but I know that they have boost to the lows (and highs).

They have great dynamics, and they sound equally detailed at both low and high volumes.

JBL really thought of the perfect monitor with the updated LSR series. They got it to sound right, then packed it with features. cat5 to daisy chain multiple monitors, RMC, volume buttons, as well as MY FAVORITE FEATURE.......a front facing power button. I can't believe it took so long for someone to do that!

Did you find this review helpful?yesno
»
Read the 9 user reviews on the JBL LSR4328P »