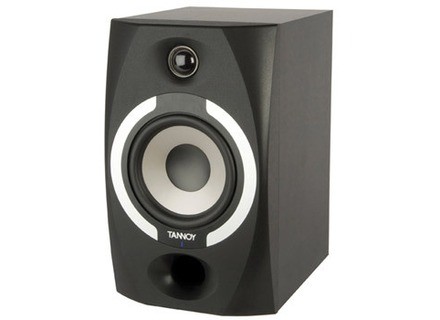 Reveal 501A, Active Monitor from Tannoy in the Reveal series.

Tannoy Reveal 501A
4
The Tannoy Reveal 501 A is an active studio monitor that is one of the best options for most home musicians when looking for the first set of monitors they want to buy. I recommend these monitors to a lot of people because of the price, and quality of sound that they deliver. These speakers are very clean and do not add color to your sound. I have used the 501 A speakers on a handful of occasions and the bass really stands out to me because they do not have the bass issues when the speakers are placed in odd or wrong parts of the room like close to corners and walls. Plus the bass port is not on the rear of the speaker. They have a front reflex bass port to take care of any issues with proximity to the wall.

The frequency response is 64 hz to 30 khz. There is a LED light to show the power and the volume controls are on the rear of the speaker with the XLR unbalanced connectors. The bass in these speakers is very clean and for this price 180.00 makes them a must have for any musician who is on a budget and cannot afford to go out and spend 300 dollars or more on a single monitor. You can get a pair of these for less than 400 dollars and get studio sounding mixes in now time. They are also very light and portable.

They have a nice build and finish to them, and won’t scratch easy. Tannoy has made many great sounding studio monitors if you want to spend some more money but I can say that these 501 A speakers are a great choice for a home musician with a smaller set up. This cannot be mounted or hung up they are desktop models.

Linn Sondek's review (This content has been automatically translated from French)" All right."

For my first pair of monitor speaker worthy of the name, I am satisfied with my choice. Manufacturing (at least one external point of view) seems to me perfect and no blame can be formulated. Tannoy has, rightly, an excellent reputation and although it is light years from end Hi-Fi speakers high that forged the legend Tannoy can only be satisfied with such a finish, especially since the price is still very accessible. Tannoy has built a reputation with Hi-Fi exception to its high performance systems that offer exceptional musicality. Obviously, this is not what is sought primarily in a home studio if only for budgetary reasons or congestion. I hesitated for some time in my choice but in this price range I do not think it is possible to find better. What is the strength of this place is its ability to reproduce the full spectrum of sounds and frequencies with balance and neutrality. So, admittedly, pushing the volume you lose a little of that neutrality and high-medium are projected as "out of context" at the expense of the balance of stamps but also the stereo image. The speakers are, in my opinion, not the cause but rather the integrated amplification. I'd be curious to hear the passive model with a good amplifier. Another good point: quite satisfactory level of low frequencies present with serious and firm. These speakers are easy to show position. The vent on the front is a greatly simplifies positioning. Finally the modest dimensions are also an asset to find a place easily on a desk worthy of the name. To summarize: in volume level middle-sufficient but these speakers offer a balanced, linear and analytical restitution with farms and present low compared with the diameter of HP, precise and defined highs and rich mids. A very good model.

The sound is clear and precise across the spectrum but lack of detail in the bass. Normal given the size of HPs. Pregnant relatively neutral but highlights the upper midrange.
Its really very clear; genuine magnifier.

Very happy with my purchase. These are my first monitor speakers but some of my friends who have long, were amazed sound for that price. Do not hesitate a second.
They are accurate but not as aggressive or yamaha HS50 80. They can do a good job.

Bolide's review (This content has been automatically translated from French)" The real "magnifying her! Nothing escapes them!"

Tannoy Reveal 501A
5
I did not choose these speakers, they offered me was a box of stuff as a reward for services rendered

I use them for the home studio, but more often instead of my stereo ... Since they are active, I simply connect (via jack) to the output "line out" from my multitrack recorder (Boss-BR600) through which my microphone and the files read by the computer.

I take off one point for the jack (I would have liked more choice, at least XLR) and the volume control from the rear, not serrated.

The frequency curve is in the ear, amazing ... the same grave, which is logically a bit limited on the speakers of this size is to respectable. Including amplified music (electric bass). After this course, a cello will look a bit cramped on these speakers, but we do not ask them what kind of benefit.

The fever is more than enough, I even put low HF filter. No consistency problem records. Sound is actually clear is accurate, sometimes almost too much for my ears accustomed to the sound of long "HiFi English" which is a little softer.

The stereo is excellent, provided you follow the recommended placement on the record: the listener placed in the triangle, at least 3m from the speakers. The sweet spot is relatively narrow, which makes sense since it is monitoring speakers.

I use them for 5 months now. I had tried any other monitors before, but frankly, I dragged my ears enough in HiFi stores this past quarter century to recognize a good forum to another!

For their use, that is to say, monitor speakers, with one or two good listeners located in the triangle to listen, they are real "lenses" to which nothing escapes! totally bluffing because of their size.

I take off one point for a noise problem coming maybe in my area, not annoying in normal listening, but we hear clearly enough between songs. This is a noise like "white", so not very annoying but ...

The ratio Q / P is indisputable. While I have not paid these speakers, but 300 € the pair is perfectly justified

Did you find this review helpful?yesno
»
Read the 5 user reviews on the Tannoy Reveal 501A »