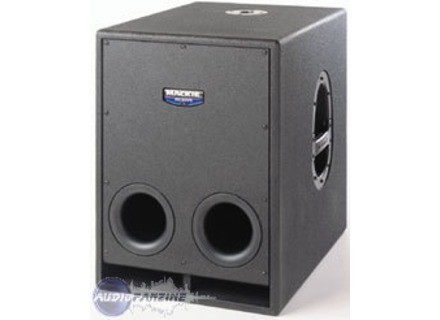 Mackie SRS 1500
5
I am mostly a techno/trance DJ, and have been doing this for about 3 years now.

The bass response is very good. I bought the pair thinking I'd need to be using both since they are relatively small speakers, but after trying it once, now most of the time I only bring one along. With both, I've filled large ballrooms with over 500 people.

The sound quality and amplification was so good that I ended up realizing that my mixer was actually distorting the bass a bit when the volume was turned up high. I ended upgrading to a better mixer (the way I finally realized this was when I borrowed a friend's mixer). With the previous subs I had, the sound was muddy enough that you couldn't tell - but the Mackies give such crisp sound that you immediately hear when things are distorting.

They are heavy. Carrying them up stairs is especially annoying. I can manage them by myself, but in general I'd recommend having two people to move them.

These speakers are very solidly built. I bought them used, and I still haven't had any problems with them. I tend to put them out on the dance floor, and even though I do my best to cordon them off inevitably people always decide they make good surfaces for putting drinks on. They've survived a couple of spilled drinks already with no problems.

I highly recommend these to anyone looking for some serious bass in a compact package. The only speaker I've heard that beats these is a custom-built dual-18" sub that weighs nearly twice as much.

Bibivolant's review (This content has been automatically translated from French)

Mackie SRS 1500
5
So to stay in the mold ... I use these subwoofers for 5 years, providing many and varied (festival, theater, conference ...). I have quite a different system on the Park (HK, Martin, Bose ...) but within the limits of its power (600 watts) I think this sub is at the top: severe percuttant round but if necessary, good management power, no harmful vibration (good case). No complaints really. May be the weight (but not for nothing). Using the built-in crossover nice (appropriate choice of cuts) is to my mind an Excellent product, whose price is right pout quality. Without any hesitation if I had to buy again I will opt for the same system.

HouseNation's review (This content has been automatically translated from French)

Mackie SRS 1500
5
produces very good quality! I was fortunate recently to find two brand new boxes in stock (ultra rare!) in a music store. these models were made in Italy and not "made in china", so proof of quality to 200%. it's solid, the bass is very deep, well rounded, it sounds great, connectivity is parfate (XLR male / female). for those who make electronic music, well you'll be pleased .. I have associated with 2 head "RCF" 525 A (750 watts) and believe me it gives off! not worth having Subwoofers oversized or too powerful, these models are an ideal place with HP minimum power of 400 watts +.
Did you find this review helpful?yesno
»